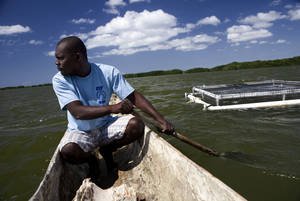 A Haitian man paddles out to his fish farm. Brazil and FAO are partnering to spread aquaculture in the Caribbean and elsewhere.

31 December, 2014 Rome – Brazil has added $17 million in funding to projects undertaken in its ongoing partnership with FAO, highlighting the Latin American country’s role as a key regional and global contributor to the fight against hunger.

The decisions, added to ongoing projects has increased the portfolio of Brazil-funded projects through FAO to over $100 million. The latest projects approved during the month of December range from school-nutrition programs and family-farming policies to fishery advisory services in Latin America and Africa.

FAO Director-General José Graziano da Silva  is currently on an official visit to Brazil, where he will attend the inauguration of new President Dilma Rousseff on January 1.

On Friday, Graziano da Silva will meet in Brasilia with a slate of new cabinet members.

The recent funding pledges made by Brazil include $5 million to support a new project for fisheries in Africa, US $4 million from for a new Regional Project for Africa, designed to promote exchange and dialogue on family farming policies; $3.5 million to expand the geographic coverage of the ongoing school-feeding project in Latin America and the Caribbean; and $4.3 million for a project focusing on promoting small-scale aquaculture to achieve food security and alleviate poverty risks around Latin America.

FAO is poised to sign a new memorandum of understanding with the Brazilian Agricultural Research Corporation (EMBRAPA), a key public research agency in Brazil’s evolution from food importer to major agricultural producer. The agreement will further FAO’s sponsorship of South-South cooperation.

Brazil is currently supporting over 27 projects with FAO for a total amount of almost US $ 100 million and is one of the top 10 contributors  to the Organization, along with the Group of Seven advanced industrial nations, Norway and Saudi Arabia.

Brazil is a strong promoter of South-South cooperation, sharing its experience with “Zero Fome” (Zero Hunger) policies with countries in Latin America, the Caribbean and Africa, and as the latest contributions underscore, its partnership with FAO is diversified and spans a wide array of ministries and governmental institutions.