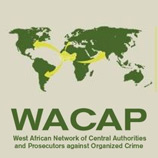 25 November 2016 – UNODC, in cooperation with the Government of Niger, discussed international cooperation against trafficking of cocaine and the smuggling of migrants in the region. The issue is of particular concern in Niger, as Agadez, a northern city in the country, is a transit hub for smugglers and migrants through the Sahara on route to Libya and beyond.

Participants at the Sixth Plenary Meeting of the West African Network of Central Authorities and Prosecutors (WACAP) discussed and identified approaches to address transnational organized crime and cocaine trafficking along the cocaine route(s) from Latin America through West Africa and on to Europe.

Prosecutors also debated about the problem of migrant smuggling within the region and the steps being taken by the Government of Niger. Discussions highlighted the need to adapt to ever changing smuggling routes and methods, to cooperate with countries of origin, transit and destination as well as the need to raise awareness of civil society about the dangers of irregular migration. Officials from the European Union’s Judicial Cooperation Unit (EUROJUST), the European Union Capacity Building Mission in Niger (EUCAP), and from the wider region shared their experience in investigating and prosecuting these cases.

Two experts from the United States (US) Department of Justice lead discussions on the law and procedure for obtaining electronic evidence, as the US is where most major internet service providers are based. This was of particular interest to practitioners from the region who are constantly faced with the challenge of dealing with fraud committed through the internet.

Present at the Plenary Meeting of the WACAP were approximately 40 WACAP focal points of 15 countries of the Economic Community of West African States (ECOWAS), plus Mauritania, as well as officials from the ECOWAS Secretariat, the ECOWAS Court of Justice, EUROJUST, EUCAP, the Brazilian Prosecution Service and the US Department of Justice. The meeting was supported by the European Union and the governments of Germany, France, Norway and the United States.

UNODC in West and Central Africa