The European Commission published today its 2014 EU Industrial R&D Investment Scoreboard. The Scoreboard is based on a sample of 2500 companies, the world’s top investors in Research and Development (R&D) and equivalent to about 90% of the total expenditure on R&D by businesses worldwide. Top world R&D investors continued to increase their R&D investments by 4.9% in 2013, a figure well above their net sales growth (2.7%). The 633 EU companies among the top world R&D investors increased R&D investment by 2.6% while showing a decrease in sales (-1.9%) and operating profits (-6.6%). 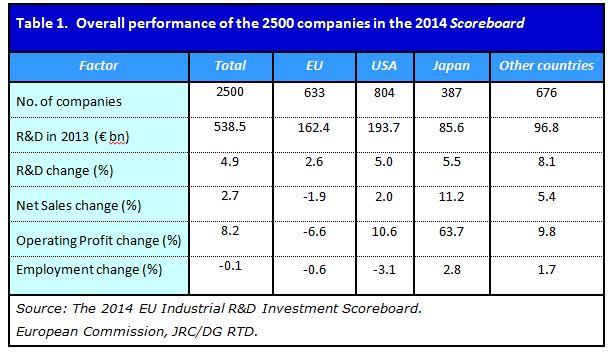 Which companies invest the most and which are the overall best performers?

For the second consecutive year, the EU-based carmaker Volkswagen leads the world R&D investment ranking, showing again a remarkable increase in R&D investment in 2013 (23%, up to €11.7bn). The other three companies in the top four positions are also the same as last year. Samsung Electronics from South Korea is second in the ranking and increases R&D by 25.4%, up to €10.2 bn. Microsoft and Intel from the US are in the 3rd and 4th places.

There are two new entries in the top ten in this Scoreboard 2014 edition: Google (9th) from the USA and Daimler (10th) from the EU. Two Swiss pharmaceutical companies, Novartis (5th) and Roche (6th), and Toyota (7th) from Japan and Johnson & Johnson (8th) from the USA complete the top ten. 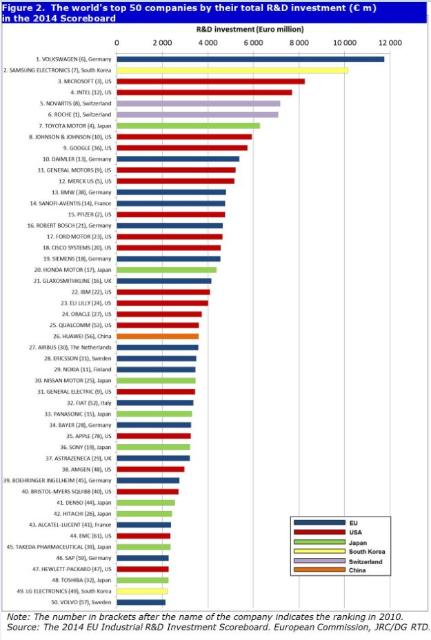 Note: The number in brackets after the name of the company indicates the ranking in 2010.

Which are the sectors leading in R&D investments?

The 2014 Scoreboard shows that the top two sectors in terms of R&D investment, Pharmaceuticals & Biotechnology and Technology Hardware & Equipment, achieved a modest increase in R&D, of 2.4% and 3.3% respectively. The highest R&D growth was seen in the Construction & Materials sector (13.6%). The following three top sectors increased R&D well above the world average: Software & Computer Services (11.4%), Electronic & Electrical Equipment (9.0%) and Automobiles & Parts (7.1%). 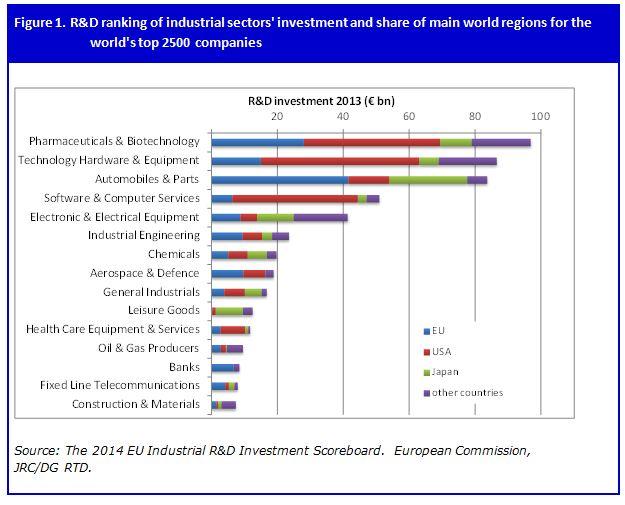 Which are the EU’s top 10 R&D investing companies? 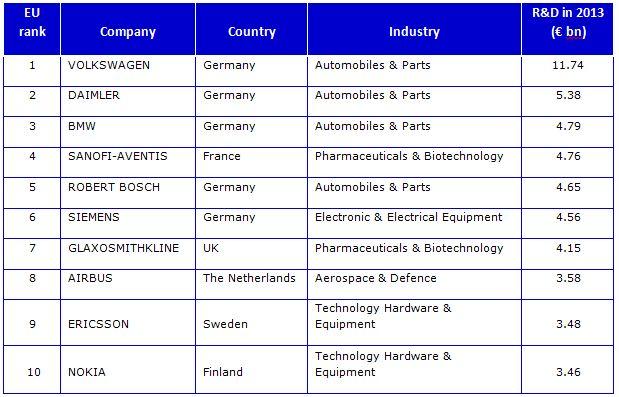 How do EU companies perform compared to US companies?

An analysis of the trends since the start of the financial crisis in 2009 shows a recovery of R&D investments in the period 2010- 2012. However R&D investment by EU based companies slowed considerably in 2013 and was accompanied by a fall in sales. Meanwhile US companies appear more resilient. In the last 10 years, the Scoreboard results show a characteristic industrial specialisation of EU and US companies that persists after the crisis and appears reinforced over the past few years. It points to a concentration of EU companies in medium-high R&D intensity sectors, in particular in Automobiles & Parts with total domestic and world R&D shares in this sector of 25.7% and 49.7% respectively. US companies on the other hand dominate in high R&D intensity sectors, particularly in ICT industries with total domestic and sector world R&D shares of 44.5% and 62.7% respectively.

US Scoreboard companies operating in high R&D intensity sectors (with the exception of the Aerospace & Defence sector) invest more than their EU counterparts. The most striking differences, both in terms of the number of companies and overall R&D investment values, correspond to the ICT sectors like Software, Semiconductors, Computer Hardware, Internet and Computer Services and to the health-related Biotechnology sector. In 2013, the overall amount of R&D investment in high-tech sectors of the EU Scoreboard companies was €61.9 billion, well below the total amount invested by their US counterparts, €142.6 billion. 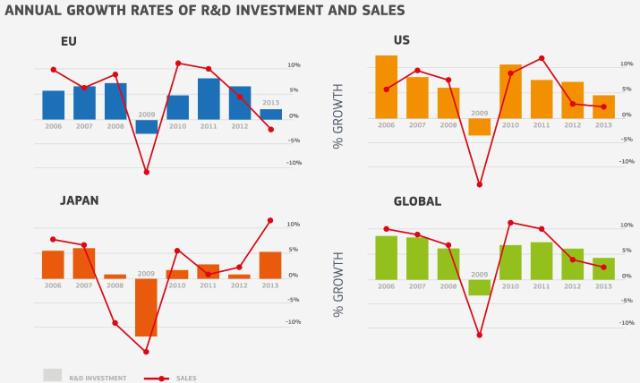 Note: For companies included in the world’s top 2500 companies in the 2014 Scoreboard for which there is data available for the whole period. Source: The 2014 EU Industrial R&D Investment Scoreboard European Commission, JRC/DG RTD.

This Scoreboard edition includes for the first time an analysis of the patent portfolios of the top 100 R&D investors (based on the 2013 Scoreboard and for the period 2010-2012).

The world’s top R&D investors in the Scoreboard are responsible for an important proportion (around one third) of all the patents filed at the US and EU patent offices. The Electronic & Electrical Equipment sector file the highest number of patents, about ten times more than the Pharmaceuticals & Biotechnology sector, with Samsung Electronics being, together with IBM, the most active among the top 100 R&D investors.

What kind of data does the Scoreboard present?

The Scoreboard collects companies’ key R&D and economic indicators, namely R&D investment, net sales, capital expenditures, operating profits and number of employees. Data correspond to the companies’ latest published accounts. For most companies these correspond to calendar year 2013, but a significant proportion have financial years ending on 31 March 2014. The R&D investment included in the Scoreboard is the cash investment that is funded by the companies themselves. It excludes R&D funded by contracts with third parties such as governments or other firms. Companies’ behaviour and performance can be analysed over longer time periods using our history database that contains information on the top R&D companies since 2003. This enables benchmarking analyses of companies across sectors and countries, for example to identify companies showing outstanding economic or innovation results and to analyse the main factors underlying such successful dynamics.

The Scoreboard is part of the European Commission’s monitoring activities to improve the understanding of trends in R&D investment, created in response to the Commission’s Research Investment Action Plan.

How do R&D Scoreboard data compare to national official statistics on production and research?

National statistics and the Scoreboard data offer two different perspectives on EU industry that convey different but complementary policy implications. The national data relate to the production and R&D activities performed within a country whereas the Scoreboard captures companies’ economic activities regardless of their location (including the results of their subsidiaries worldwide, but excluding the actual location of activities). While in most cases companies undertake a large share of their R&D activities in the country in which they are based, there are some cases where the location of the company headquarters does not correspond to the main share of R&D activities. For example, Airbus is located in the Scoreboard analysis in the Netherlands, whereas most of its R&D activities are undertaken in other countries.

National and scoreboard dataare complementary and should be considered side by side to provide a full picture of the cross-border production and R&D activities of companies. This is essential to understand the full policy implications for competitiveness, value-added and jobs.

Can the EU’s top investors close the R&D gap?

An analysis of the EU’s top 1000 R&D investors shows that these could provide a good basis to promote the necessary shift of the European industrial structure towards more knowledge-intensive sectors. Stronger economic efficiency for some of the current leading innovators and more rapid growth of potential future leaders in key high-tech sectors is required to close this gap.

Companies populating the bottom half of the 1000 sample include companies in high and medium-high R&D sectors with a healthy growth record in R&D and sales over the last few years. The Software & Computer Services, Pharmaceuticals & Biotechnology, Industrial Engineering, and Electronic & Electrical Equipment sectors concentrate the largest number of good performers in this subsample.

The analysis of the performance in terms of the Value Added (VA) created by the EU companies shows significant differences both between and within industrial sectors. The ratio of VA to net sales of the Software & Computer Services sector is more than twice the one of the Automobiles & Parts sector. The largest ratio of VA to costs of resources (wealth creation efficiency) is found in Pharmaceuticals & Biotechnology, which is three times more ‘efficient’ than the Electronic & Electrical Equipment sector.

What about the financial crisis? Is it over?

While maintaining the focus of their R&D investment in the EU, they reap the growth opportunities in emerging economies. Two out of three of the responding EU-based companies signal their home country as the most attractive location for R&D investment. The US, Germany, China and India are the most attractive locations mentioned outside the home country. Human resources, knowledge-sharing, and proximity to other company sites make countries attractive for R&D activities. 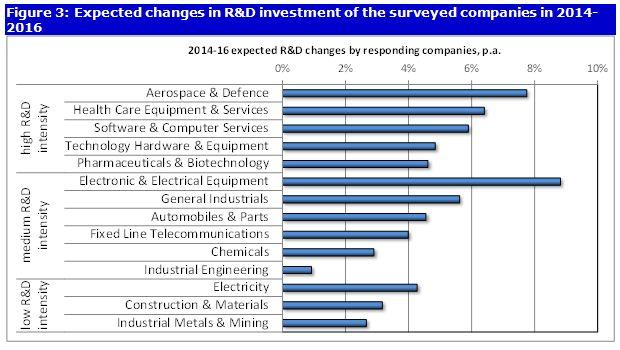 [1] The top 1000 R&D investors in the EU is an extended sample of companies representing, the 633 EU companies included in the world’s top 2500 sample and 367 additional companies based in the EU.