You are here: Home / General / World leaders gather at UN to renew commitment to build and sustain peace 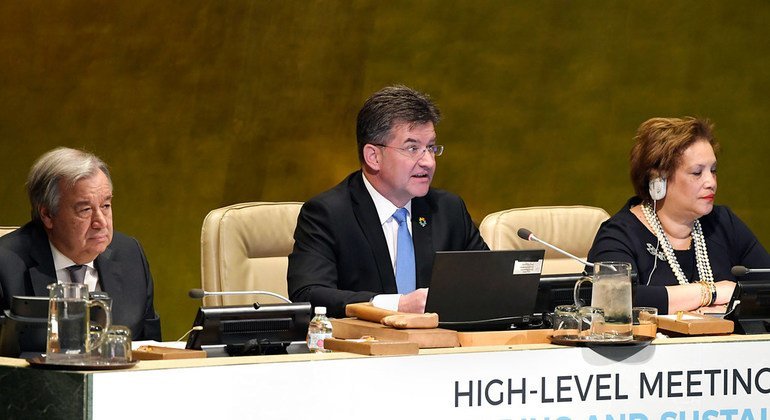 “The first line of the United Nations Charter commits us to saving succeeding generations from the scourge of war,” UN General Assembly President Miroslav Lajčák said in his opening remarks to the High-Level Meeting on Peacebuilding and Sustaining Peace, which runs through tomorrow at UN Headquarters in New York.

“In a way, we have met this commitment. There has not, since, been another world war. But, in many other ways, we have not,” he said, noting that a new approach is needed to save people in places of unending conflict, including Syria, South Sudan, Yemen, Libya, Somalia and Afghanistan.

Mr. Lajčák said that in 2016, the UN decided to take a new approach: the General Assembly, along with the Security Council, adopted what are now known as the ‘sustaining peace resolutions,’ which renew the world body’s commitment to conflict prevention as embodied in the UN Charter.

Two years on, there are challenges in making this approach a reality, he said, calling for greater international attention to the need for scaled-up efforts to prevent conflict, achieve coherence within the UN system, and expand partnerships, financing, and inclusion.

Echoing the Assembly President’s view, Secretary-General António Guterres highlighted the need to strengthen partnerships around all efforts, and at every stage, from conflict prevention and resolution to peacekeeping, peacebuilding and long-term development.

Key partners include Governments, the UN, other international, regional and sub-regional organizations, international financial institutions, the private sector, and civil society, including women’s and youth groups, he added.

“Sustaining peace will only be realized through committed, inclusive national ownership that considers the needs of the most marginalized, including women, young people, minorities and people with disabilities,” he said.

The UN chief said that more countries are experiencing violent conflict than at any time in nearly three decades, and that record numbers of people are on the move, displaced by violence, war and persecution.

“Inequalities are increasing; whole regions, countries and communities can find themselves isolated from progress and left behind by growth. These are all indications that we need greater unity and courage – to ease the fears of the people we serve; to set the world on track to a better future; and to lay the foundations of sustainable peace and development,” Mr. Guterres stressed.

Jayathma Wickramanayake, UN Secretary-General’s Envoy on Youth, called on Member States to increase financing for the peacebuilding work led by youth and see young people as partners in the sustaining peace agenda.