German Foreign Ministry: The War In Libya Can Only Be Stopped By The Parties To The Libyan Conflict Sitting At The Same Table

ticket title
France voices concern about current tense situation in Libya
Libya crisis: France suspends Nato mission role amid Turkey row
102 illegal immigrants rescued off western Libyan coast
The Mandate Of The European Mission In Libya Is Extended Until Early July Next Year
German Foreign Ministry: The War In Libya Can Only Be Stopped By The Parties To The Libyan Conflict Sitting At The Same Table

You are here: Home / General / We must take the fight to the traffickers along maritime routes, says UNODC Chief 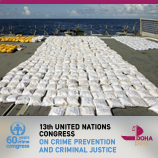 To counter this, more robust responses to maritime drug trafficking were needed from the international community he said. Comparing the fight against crime on the high seas with that on land, Mr. Fedotov underscored it was imperative that the maritime domain was not ignored.

UNODC has worked with Member States and other partners to achieve impressive results in the maritime piracy fight. The four piracy prosecution states, Kenya, Seychelles, Mauritius and Tanzania, for example, have tried three hundred and fourteen suspected pirates in the last four years.

But, he said, it was now time to take the fight forward against the maritime traffickers. UNODC was doing this through its new Global Maritime Crime Programme, which is now geared towards taking on transnational organized crime on the high seas.

“While there remain challenges with prosecuting narcotics traffickers detected at sea, we will continue to work with coastal states to introduce enabling legislation, in line with international conventions, that will help to improve investigations and strengthen criminal justice responses,” said Mr. Fedotov.