You are here: Home / General / US Customs in Dublin and Shannon implement Trump’s travel ban

President Trump’s travel ban is being implemented again today by US Customs at Dublin and Shannon airports, as well as at ports of entry across the United States.

It is estimated that up to 200 people are being detained at American airports and in transist around the world as a result of the orders. 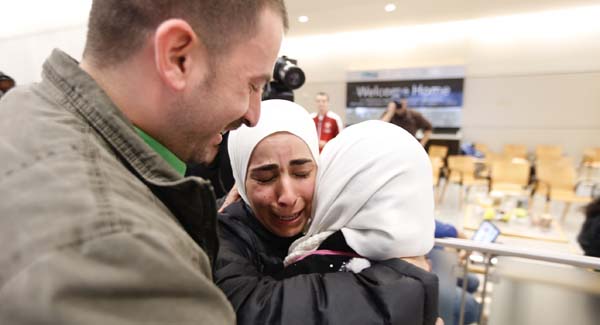 Mr Trump’s orders include is a 90-day ban on travel to the US by citizens of Iraq, Syria, Iran, Sudan, Libya, Somalia or Yemen and a 120-day suspension of the US refugee programme.

The order singled out Syrians for the most aggressive ban, indefinitely blocking entry for anyone from that country, including those fleeing civil war.

A note on the US Embassy website in Dublin says that nationals of the countries listed, who have already scheduled a visa interview in Dublin, should not attend their appointment as the Embassy will not be able to proceed with their interview.

The note is titled ‘Embassy Statement on POTUS* Executive Order Enhancing Public Safety in the Interior of the U.S.’

A former Minister with responsibility for Immigration has described Trump’s moves as “absolutely outrageous”.

Senator Aodhán Ó Riordáin said that across the globe refugees are put through stringent security procedures regardless of the new US President.

“Anybody who wants to get refugee status or apply for asylum anywhere in the world (goes through) extreme vetting,” he said.

“Refugee status is a sacred international staus that is not handed out willy-nilly.”

Clare-based Senator, Martin Conway – the Seanad Spokesperson on Justice, Equality and Human Rights – said the order was a regressive step.

“This goes against what many Americans believe is the right thing to do,” he said.

“Unfortunately, we are now living in a new world, (with) a new world order, where one of the biggest stakeholders in world humanity is effectively turning its back on the most vulnerable people in the world.

“That is not the America that many thousands of Irish people emigrated to.”

The Executive Order suspends visa issuance and entry into the United States of nationals of Iraq, Iran, Libya, Somalia, Sudan, Syria, and Yemen, including people with dual citizenship.

The note on the US Embassy website says: “Nationals of these countries, including dual nationals, who have already scheduled a visa interview at U.S. Embassy Dublin should not attend their appointment as we will not be able to proceed with the visa interview.”

Citizens of countries in the US visa waiver programme, including Ireland, will continue to be able to travel to the US for up to 90 days of business or tourism without a visa, provided they receive approval through the Electronic System for Travel Authorization (ESTA).

The United Nations’ refugee agency, the UNHCR, said it hopes the US would continue its long tradition of protecting those who are fleeing conflict and persecution. External Relations Associate at UNHCR Jody Clarke said the refugee resettlement programme “gives a second chance to people who really have no opportunity to return home to the country they fled from”.

Part of Donald Trump’s temporary immigration ban for nationals of the seven Middle Eastern countries listed above has been blocked by an American court. (Read more here.)

Earlier, Donald Trump insisted his immigration reforms were “not a Muslim ban”, and said they were “working out very nicely”.

* POTUS = President of the United States.