DUBAI, United Arab Emirates, Jan. 31, 2019 /PRNewswire/ — As part of a longstanding partnership with the UAE’s Ministry of Health and Prevention (MOHAP), Children’s Hospital of Philadelphia(CHOP), a global leader in pediatric healthcare, exhibited some of its leading medical breakthroughs in the MOHAP booth at the annual Arab Health Exhibition and Congress, in the Dubai International Convention and Exhibition Centre. Among the innovations designed to benefit children, the booth showcased an investigational womb-like device that could lessen mortality and morbidity rates in severely premature infants, and the United States’ first-ever approved personalized gene immunotherapy for cancer. 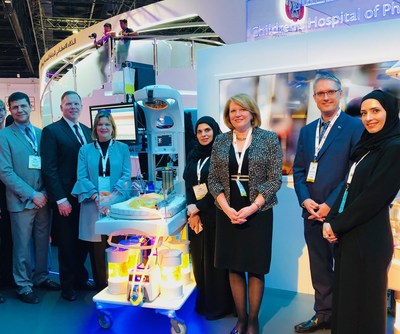 This unique opportunity illustrates both CHOP and the UAE’s shared goals of combining advanced medical technology with compassionate care to provide the best possible outcomes for children around the globe.

H.E. Dr. Youssef Mohammed Al Serkal, Assistant Undersecretary for the Hospitals Sector, confirmed the importance of the device in premature infant care, as a leading achievement to promote pediatric and early motherhood medicine.

Dr. Al Serkal also confirmed the significance of the cooperation with Children’s Hospital of Philadelphia in promoting the quality of healthcare services, especially in fetal medicine, in line with the Ministry’s strategy to promote quality and safety of medical and health systems according to the best international practices.

“Whether a child comes to us from Philadelphia, or from halfway around the world, it is our spirit of shared innovation with partners such as the UAE that ensures every child is given the best treatment options available,” said Madeline Bell, President and CEO of Children’s Hospital of Philadelphia. “Whether we’re fast-tracking discoveries that may benefit babies born prematurely, reprogramming a child’s own immune system to kill leukemia cells, or leading the charge on new cellular gene therapies, we are committed to solutions that give all children the ultimate gift: a lifetime.”

CHOP’s artificial womb, which contemplates fetal lamb and eventually human models, was demonstrated in the booth by co-inventor Marcus Davey, PhD, and could be a breakthrough for the world’s most vulnerable infants. The exhibit featured a simulated womb-like environment that supports fetal circulation in a lamb. In animal tests led by Dr. Alan Flake, pediatric and fetal surgeon, the womb-like device has supported gestation of a fetal lamb for as long as 28 days. CHOP’s landmark findings were published in Nature Communications in 2017.

CHOP’s second exhibit featured David Teachey, MD, demonstrating CHOP’s CAR T-cell therapy that reprograms a patient’s own immune cells to recognize and destroy cancer cells. Teachey was part of the team led by Dr. Stephan Grupp that treated the world’s first pediatric patient with CAR T-cell therapy, developed by a team led by Carl June, MD, from the University of Pennsylvania, in collaboration with CHOP and Novartis. CHOP’s most recent efficacy data shows 94 percent of children with relapsed or refractory acute lymphoblastic leukemia, (r/r ALL) achieve remission at three months after a single infusion of CAR T-cells. Kymriah(R)* (tisagenlecleucel, formerly CTL019) became the first-ever U.S. Food and Drug Administration (FDA) approved gene therapy in 2017, and since approval, CHOP has treated more than 250 patients, more than any other pediatric institution in the world.

As President and CEO, Madeline Bell champions change with empathy and integrity, inspiring the nearly 16,000 employees in the hospital’s $2.8-billion-a-year health system and research institute to create breakthroughs that have worldwide impact. Widely recognized for her bold and visionary leadership, Bell received the Philadelphia Inquirer’s Industry Icon Award in 2017, and was named one of Modern Healthcare’s “100 Most Influential People in Healthcare” in 2017 and 2018.

Dr. Davey is a developmental physiologist and senior research investigator at the Center for Fetal Research at Children’s Hospital of Philadelphia, an extension of CHOP’s Center for Fetal Diagnosis & Treatment.

Dr. Davey has been part of a team working on cutting-edge studies aimed at treating a wide variety of genetic disorders before birth. His extensive research has explored the safety and efficacy of fetal therapies with the potential to improve respiratory function and lung development.

He has served as co-inventor on the unique womb-like, fluid-filled environment to provide prolonged (up to four weeks) physiologic support for extreme prematurity. He is study director of an early feasibility animal trial to evaluate clinical translation of the artificial womb technology.

Dr. Teachey is an attending physician and researcher at Children’s Hospital of Philadelphia with expertise in both oncology and hematology, and often treats children who have a problem that has gone unsolved. He takes a “bench-to-bedside” approach, testing and perfecting new therapies including the first U.S. FDA-approved personalized, cellular gene therapy in the lab, and working to bring those therapies to the clinic. His investigation of new targeted therapies has led to a number of clinical trials, where he serves as study chair and performs the correlative biology in his lab. Dr. Teachey was instrumental in observing cytokine release syndrome (CRS) in children undergoing CAR T-cell therapy, and in discovering IL6-directed therapy with tocilizumab to treat potentially severe complications.

He is also is co-leader of a new multidisciplinary team focused on treating patients with immune system disorders and inflammation. This type of team is unique to CHOP and consists of over 40 physicians from over 10 different medical specialties who help diagnose and treat the unsolvable patient.

As the Chief Strategy Officer, Dr. Bayley leads strategic planning and business development efforts, supporting the CEO in developing the strategy to advance CHOP’s mission and manage change in a dynamic healthcare marketplace. He also drives the development of the Global Medicine program, including the Center for Global Pediatric Education and CHOP’s Global Health efforts.

Ruth Frey’s experience spans a wide range of clinical care settings, from the neonatal and pediatric intensive care units, to program development supporting CHOP global initiatives. She is responsible for new business and market development efforts, and working closely in managing and maintaining key strategic relationships. Frey sits on the Advisory Committee of the US Cooperative for International Patient Programs.

REPORTERS: For video and still photographs of the artificial womb and CAR T-cell therapy, please contact Amy Burkholder, BurkholdAS@email.CHOP.edu, or 215-284-6177 on site at Arab Health or Joey McCool Ryan, mccool@email.chop.edu, or 267-426-6070, at Children’s Hospital of Philadelphia.

*Kymriah® is a registered trademark of Novartis.

About Children’s Hospital of Philadelphia: Children’s Hospital of Philadelphia was founded in 1855 as the nation’s first pediatric hospital. Through its long-standing commitment to providing exceptional patient care, training new generations of pediatric healthcare professionals, and pioneering major research initiatives, Children’s Hospital has fostered many discoveries that have benefited children worldwide.  Its pediatric research program is among the largest in the country.  In addition, its unique family-centered care and public service programs have brought the 546-bed hospital recognition as a leading advocate for children and adolescents. For more information, visit http://www.chop.edu.