UN Secretary-General: Compatibility Between The Military Wings In Libya Will Enable Us To Cease Fire

Head Of The Munich Security Conference: The European Bloc Must Speak “In A Language Of Strength” And Threat To Represent Its Interests In Libya

ticket title
Libyan Coast Guard rescues 184 illegal immigrants off western coast
UN Secretary-General: Compatibility Between The Military Wings In Libya Will Enable Us To Cease Fire
Head Of The Munich Security Conference: The European Bloc Must Speak “In A Language Of Strength” And Threat To Represent Its Interests In Libya
UN Mission In Libya: Landmines Planted South Of Tripoli Left Dead And Wounded, Including Civilians
Tunisian-Greek Discussions On Security Developments In Libya

Four years after the toppling of Col. Muammar Qaddafi, he United States is mulling new military campaign in Libya to help stabilize the country. Peter Cook, a Pentagon spokesman, on Wednesday said officials are currently “looking at military options” to stop the Islamic State militant group from making further gains in the North African country. 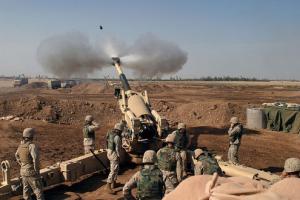 Four years after the toppling of Col. Muammar Qaddafi, he United States is mulling new military campaign in Libya to help stabilize the country.

He noted that at present, the United States is focused on identifying local allies who could be enlisted for what a senior U.S. military officer said would be a “decisive” confrontation with ISIS.

DW notes that the United States ended military operations in Libya after Gaddafi was killed by rebels in October 2011. Libya has since disintegrated, with various armed militias controlling different parts of the country.

Cook acknowledged that the “metastasis” of ISIS beyond its base in Iraq and Syria has led the Pentagon to reassess the question of a renewed war in Libya.

A “small group” of U.S. forces had made contact with Libyan militiamen, “simply to get a sense of who the players are,” Cook said.

The United States already operates in Libya, employing Special Forces, but Cook declined to offer any details on these forces and their missions. Cook, instead, described the contacts the United States has made with potential local allies as closer to a broad assessment mission than the so-called “shaping operations” which precede imminent combat.

“We are extremely worried about the metastasis of Isil in a number of locations, Libya being just one of those locations,” Cook said.

DW notes that in recent weeks, the Pentagon has unveiled plans for an expanded global campaign against jihadist groups, a campaign which would involve the creation of “hubs” for U.S. forces in terrorism-infested areas. Defense secretary Ashton Carter said in a speech that beyond Iraq and Syria, the United Staes would launch a “flexible and nimble response” against ISIS in North Africa and elsewhere.

Defense.govreports that last week, joint chiefs of staff chairman General Joseph Dunford said he and his French counterpart were preparing for “decisive military action” against ISIS in Libya. Dunford stressed, though, that to be effective, a military campaign in Libya must be part of a broader political effort in the country.

“They’re trying to get a clearer picture of what’s happening there, and they’ve made contact with people on the ground to try and get a better sense not only of the threat that [ISIS] poses there but the dynamic on the ground in terms of the security situation,” Cook said.

“We’re looking for partners who can give us a better sense of the security situation, and it’s not just the United States that has a keen interest here, it is our foreign partners as well.”