Salama: We Are Committed To Transforming Truce Into Lasting Ceasefire

You are here: Home / General / Thousands of migrants return home safely from Libya as part of UN-supported programme 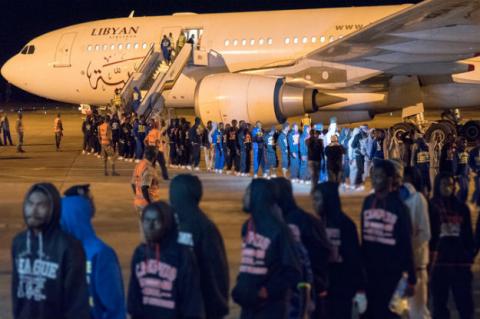 “We are continuing to assist migrants inside Libyan detention centres, while increasing efforts to reach stranded migrants outside of detention,” said Othman Belbeisi, Chief of the International Organization for Migration’s (IOM) Mission in Libya.

In the same period, another 5,200 migrants have returned with African Union (AU) support.

“Since the expansion of our VHR operation, the number of migrants in official detention centres have dropped from an estimated 20,000 people in October 2017 to 4,000 people today, a five-fold decrease,” he continued.

Since January 2017, some 23,302 migrants have repatriated through the VHR programme, which consists of the European Union (EU), AU and Libyan Government,

Nearly half of voluntary returns executed by IOM from Libya are part of the larger EU-IOM Joint Initiative on Migrant Protection and Reintegration initiative – active in Libya as well as 26 countries in North Africa; the Sahel and Lake Chad region; and the Horn of Africa – that supports reintegration for returnees in countries of origin,

With partners, IOM has been scaling up activities to meet the surge in returnees and ensure assistance upon their arrival, and in the longer-term – to readjust to their communities.  The programme also offers reintegration assistance for those returning from EU States.

IOM Regional Director for the EU, Eugenio Ambrosi, said that the VHR operation’s scale of protection needs and number of returns have overtaken initial planning and pose challenges for countries of origin.

“We are embarking on a completely new approach to reintegration and we believe in it,” maintained Mr. Ambrosi. “It will take some time to build, and in cooperation with authorities in countries of origin and the local communities, we are already seeing promising developments.”

IOM Regional Director for West Africa, Richard Danziger said: “The Joint Initiative, in partnership with the governments of countries of origin and the African Union, aims to make sure that the migration process is safer, and that returning migrants can get back to their countries of origin safely and re-establish their lives without the feeling that they are a burden for their communities and families,”

However, he cautioned that as many returnees from Libya are traumatized after having suffered unspeakable abuses, saying their immediate medical and psychosocial needs have taken priority.

The new, reintegration approach aims to mitigate tensions by involving local communities at home in the process and raising awareness to address return stigmas, which is why capacity building, social, psychosocial, and community-based aspects are being built into the programme.

“The initiatives we are undertaking with the EU and our African partners represent a new chapter in migration cooperation,” underscored Mr. Ambrosi.

“It is the first time that substantial funding has been invested to support the priorities and capacity of partner countries to manage return and reintegration and to make migration itself a safer and informed process,” he concluded.