Tyson Foods has a chicken processing facility in the town, which had about 1,800 residents when the 2010 Census was taken. Wochit

NOEL, Mo. — In the far southwest corner of Missouri, refugees may be putting food on your dinner table.

Abdulkadir Abdullahi, a native of Somalia who came to the United States in 2009, estimated that 400 to 500 Somalis, along with some 60 to 70 Sudanese — many of them refugees — now live in the town of Noel, where U.S. Census workers counted a bit more than 1,800 residents in the 2010 Census. He makes a living as an interpreter between the residents and various community groups.

Nearly everyone works for one employer: a chicken processing facility that Tyson Foods (TSN) operates. It sits across the Elk River from downtown, and starting about 10 years ago, the plant’s relatively high starting wages and promises of steady work changed the town’s demographics.

“The companies who produce food, like chicken, throughout the year they don’t have layoffs,” Abdullahi said, explaining Noel’s main appeal to the newcomers.

While rural America often is overwhelmingly white, in the past decade the meatpacking industry has attracted an influx of refugees to select small towns. Along with Noel, sizable Somali communities can be found in places like Liberal, Kan.; Lexington, Neb.; and Fort Morgan, Colo.

A spokesman for Arkansas-based Tyson said the starting wage at the Noel facility is $11 an hour. Workers said employees can get a $1,200 bonus after 90 days. Most Somalis work the shift that begins at 4:30 p.m. CT, Abdullahi said. Opportunities for overtime mean they may work until 2:30 a.m. or later.

In 2014, Tyson told the University of Missouri Extension that the Noel facility employed about 1,600.

Noel Mayor John Lafley said the plant has attracted two distinct waves of newcomers to town over the years. The first came in the 1990s, when Hispanics began taking jobs at Tyson.

Noel continues to have a large Latino presence. Nationally, however, immigration from Mexico has declined in recent years.

► Related: Travel ban: How we got here and what is next

Additionally, federal immigration agents’ raids of several meatpacking plants in the mid-2000s are believed to have prompted the industry to look for ways to avoid undocumented workers.

That meant a second shift in Noel’s demographics, as refugees from Somalia, along with individuals from Micronesia and Burma, began arriving. Refugees accepted into the United States can work legally, and one of the goals of aid agencies is to help them on a path to self-sufficiency. 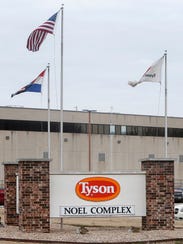 On Thursday morning, inside a two-bedroom apartment a block from Main Street, 3-year-old Bedel Kayd and his 1-year-old brother Saadiq sat quietly while finishing a bag of cheese puffs. With Abdullahi acting as translator, their mother, Mun Omer — a Somalian who arrived in the United States in October — said she initially thought President Trump’s executive order banning immigrants or visa holders from seven countries — Somalia, Sudan, Iraq, Iran, Libya, Syria and Yemen — for 90 days and refugees for 120 days meant refugees like her would have to return to their home countries.

Omer said she was relieved, to a degree, to learn that her initial fear wasn’t true. But the reality still doesn’t bode well for her father, who is trying to come to America.

“They did the paperwork, like medical and background check and screening,” she said. “They were just waiting on the flight.”

Another Somali woman who became a U.S. citizen in 2013 said she has two sons and a daughter who live in a refugee camp in Ethiopia. A third son died in February 2016, and she was unable to afford to travel to Africa for his funeral.

Somalis have faced a decades-long civil war in their African country of 10.8 million. In 1990, the United Nations High Commissioner on Refugees estimated that about 470,000 Somalis living outside the country, 55% of the Somali diaspora, were in refugee camps; by 2014, the number of Somali refugees was 1.1 million.

By mid-2015, the United States was home to about 150,000 Somali migrants, according to the United Nations. The country’s capital of Mogadishu is almost 9,000 miles from Noel.

The woman in Noel, who declined to give her name, said her daughter had been cleared to come to America and is scheduled to make the trip in November. While that’s well past the period of Trump’s order, the woman is worried nonetheless. 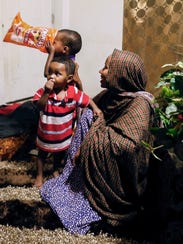 Somali refugee Mun Omer laughs Feb. 2, 2017, as her son Bedel Kayd, 3, pours the last crumbs of Cheetos out of the bag and into his mouth at their apartment in Noel, Mo. Also pictured is Saadiq Kayd, 1. (Photo: Andrew Jansen, Springfield (Mo.) News-Leader)

Trump has said his executive order is necessary to prevent “radical Islamic terrorists” from entering the nation.

Critics have argued the order amounts to a religious test for entering America. The seven countries are majority Muslim, and Trump told Christian Broadcasting Network that persecuted Christians would be given priority in applying for refugee status.

Noel’s Main Street is home to a fairly inconspicuous mosque that Abdullahi said opened in 2009. Purple curtains hang over the storefront windows.

Next door is the African Grocery Store that opened in 2010, which offers goods like colorful head scarves and rugs in addition to specialty foods.

The Trump administration has noted that the Obama administration originally identified the seven countries as countries of concern. Supporters of the order have said it doesn’t amount to a religious test because almost 50 countries were majority Muslim in 2010, according to the Pew Research Center on Religion and Public Life.

Noel’s demographic shift can be seen in local schools. In 2013, KBIA-FM, Columbia, Mo., reported that the 401 students at Noel Elementary School spoke 11 languages, and 88% qualified for free or reduced-price lunch — up from six languages and 49% in 2008.

In October 2011, about 130 Somali workers briefly walked off the job during a dispute over prayer time, The Joplin Globe reported. Observant Muslims pray five times a day.

At the time, workers said management changes left them unable to take rotated breaks. Tyson said its religious accommodation policies hadn’t changed and that the matter “was rooted in language differences.”

► Related: Iraqi family now can fly to U.S., ‘land where our dreams will come true’

Differences, language or otherwise, continue to be a factor.

Lafley, the mayor, voiced frustration with Somali residents, saying they generally keep to themselves and have failed to assimilate, unlike the Hispanics.

The refugees “want to practice their Sharia law here, and that’s one thing the city won’t tolerate,” he said. Sharia law refers to the set of principles that direct the moral and religious lives of Muslims.

Lydia Kaume, a nutrition specialist with the University of Missouri Extension, said driver’s education was found to be a need. Accidents were being attributed to new arrivals’ lack of knowledge about the rules of the road.

“It’s an issue of not knowing what the expectations are,” Kaume said generally of the community’s challenges.

Several years ago, tires were slashed on more than a dozen of Somalis’ cars, KBIA-FM reported. More recently, three individuals are facing charges after a Somali woman said they yelled at her and used racial slurs before assaulting her at a city park in October, The Globe reported.

Lafley said the town doesn’t have enough housing for the newcomers. So Somali residents live in commercial buildings or with numerous unrelated individuals in a single home, both in violation of city ordinance.

“A lot of people aren’t happy because their little town is turned into a third-world country,” he said.

He acknowledged the feeling of alienation likely goes both ways.

“When they get together on Main Street to go to the mosque, it kind of intimidates some people,” he said. “You get a bunch of white people milling around, and it probably intimidates them.”

Asked if Trump’s executive order could affect Tyson’s ability to staff its Noel plant, officials referred a reporter to the North American Meat Institute. In a statement, the trade group said it hopes the Trump administration “will give careful consideration to the ramifications policy changes like these can have on our businesses and on foreign born workers who are eager to build new lives in America through the jobs our companies can offer.”

“Workforce needs are a constant challenge in our line of work, but we don’t foresee any negative impact on chicken production in the near future from this,” said Tom Super, vice president of communications for the National Chicken Council. 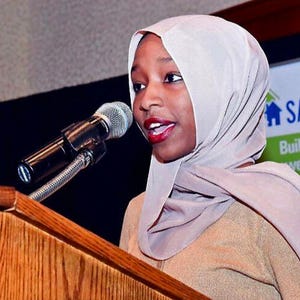 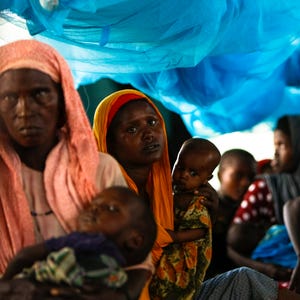