You are here: Home / General / Press release – ‘Less bureaucracy and more politics’ message by Tajani to Summit in Valletta 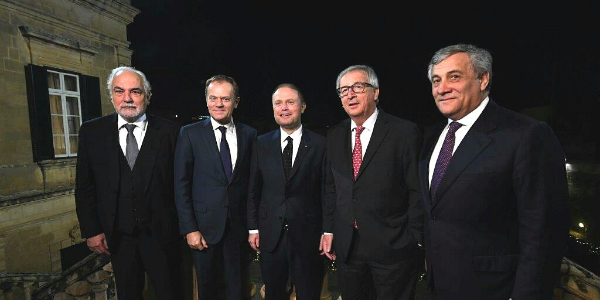 European Parliament President Antonio Tajani visited Malta on the eve of the Informal European Council to be held in Valletta on 3 February. Tajani met representatives of Maltese civil society, student organisations, unions, business organisations and NGOs at Europe House in Valletta for an informal exchange of views on the challenges facing Europe today.

‘Europe must be changed not killed’ said President Tajani in his address highlighting the imperative need for Europe today to explain better its work to the European citizens while striving to deliver more concrete solutions.

‘Less bureaucracy and more politics’ is needed to make sure that Europe remains competitive with markets such as Russia, the United States and the Far East.

‘At the same time we must remain confident of our significant achievements and remain optimistic’ Tajani declared.

Apart for meeting stakeholders Tajani had informal discussions with Prime Minister Muscat, President Tusk and President Juncker touching upon the themes of the Informal European Council with an emphasis on migration, Libya and the future of the European Union.

In Malta Tajani also paid visits to Foreign Minister George Vella and the Leader of the opposition Simon Busuttil.

In the meeting with Minister Vella President Tajani said that the Maltese Presidency comes at the right time to put the spotlight on important issues especially on migration where Malta has a story to share being in the middle of the Mediterranean route. President Tajani pledged the support of the European Parliament to advance the concrete decisions to be taken with the Maltese Presidency of the Council during these six months.

In the meeting with Simon Busuttil at the Nationalist Party headquarters Tajani was welcomed for his dedication and commitment towards the European cause. Tajani remarked that Malta understood the challenge the Union was facing in its bid to be closer to the people adding that intentions were not enough, however, and they had to be supported by concrete action.

Antonio Tajani was elected President of the European Parliament on 17 January 2017 for a two and a half year term until the next European elections in 2019.