The Chief Executive of Oxfam Ireland has suggested that the criticism by EU leaders of US President Donald Trump’s Executive Order on refugees and immigrants highlights their own hypocrisy in the face of Europe’s flawed migration response.

At an informal EU meeting in Malta on Friday, February 3, Taoiseach Enda Kenny and other EU heads of state and government will discuss closer cooperation with Libya on managing migration.

The talks could see Libya receive aid in return for strengthened border control and surveillance to stem the flow of refugees and migrants coming to Europe. 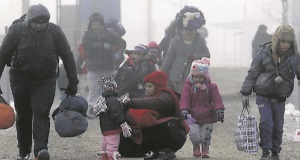 Oxfam described this as a deliberate outsourcing of migration control to a country mired in conflict where migrants are at great risk of abuse and even death. Such a move would mean EU leaders would again fail in their responsibility to uphold the rights of refugees and migrants.

Oxfam Ireland Chief Executive’s Jim Clarken said EU leaders cannot speak out against President Trump’s discriminatory and unjust Executive Order and then make a deal with Libya which also threatens the safety and dignity of refugees and migrants.

“I have met young people who have experienced horrific abuses in Libya and are now living in safety in Oxfam-supported centres in Sicily. People who have managed to escape have told us about beatings, burnings, starvation and exploitation.

“In their haste, European leaders are throwing money at authorities in war-torn Libya without the necessary checks and balances.

“A deal that aims to above all else stop migrants from entering Europe is dangerous and runs contrary to Europe’s core values – shutting down borders does not stop desperate people searching for safety but forces them to seek more dangerous and exploitative routes. EU member states must put the rights, safety and dignity of people at the forefront of any plans to cooperate more closely with Libya.”

As leaders meet on Friday to discuss how to manage migration from Libya and other African states, Oxfam is calling for EU heads of state and government to manage migration with full respect for human rights and concern for the safety of people. Governments must protect migrants, grant international protection to refugees and promote safe and regular channels for migration, it said.

Oxfam is calling for an EU migration management plan that:

· Delivers development aid for the sole purpose of poverty reduction. Under no circumstances should development aid be used to restrict mobility, as this may even work counter to the aim of reducing poverty.

· Ensures cooperation on border control is contingent upon demonstrated respect for human rights, mobility principles, and the rights of asylum-seekers.

· Includes credible monitoring schemes to ensure the implementation is in line with international law. If this is not possible, no deal should be agreed.

Beyond Europe, Oxfam has joined the American Civil Liberties Union and the Commonwealth of Massachusetts in a lawsuit against President Donald Trump’s executive order. The suit claims that the order violates federal law and calls on it to be declared unconstitutional. As a global organisation working in five of the countries – Syria, Iraq, Somalia, Sudan and Yemen – affected by Trump’s actions, as well as other conflict-affected countries, the order could jeopardise the charity’s ability to address some of the worst humanitarian crises around the globe.

In Ireland, Oxfam has urged the Government to step up its intake of refugees and help fill the void left by the recent actions of the US government. Oxfam is calling on leaders to increase the number of refugees resettled through the Irish Refugee Protection Programme, including some of those now denied a safe haven in the US.

Oxfam is also calling for increased opportunities for family reunification in Ireland and for the Government to expand the Syria Humanitarian Admissions Programme to allow those fleeing persecution from other war-torn states such as Somalia, Afghanistan, Iraq and Central African Republic to be granted refuge here.