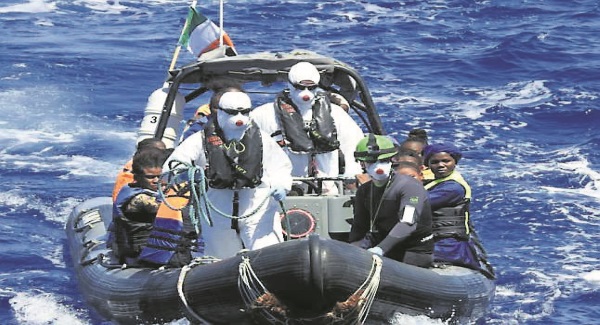 The LÉ Róisín has carried out three separate operations in the Mediterranean today resulting in the rescue of 347 people.

Some 668 migrants were saved from boats in distress in the Mediterranean off Libya today, officials say.

They were rescued by Italian coast guard and navy ships, aided by Irish and German vessels and humanitarian organisations, Italian and Irish officials said.

The rescues are the latest by a multi-national patrol south of Sicily that has saved thousands this week.

The Defence Forces said the vessel Le Roisin, deployed earlier this month in the humanitarian search and rescue mission, saved 123 migrants from a 12-metre-long dinghy and recovered a male body.

This morning the Naval Vessel rescued 123 people from a rubber vessel off the Libyan coast near Tripoli. The body of a man was also recovered from the vessel.

The crew were then re-tasked to a mission on an Italian ship and a further 101 migrants were rescued.

And this evening a further 123 rescued migrants were transferred from a German ship – the Karlsruhe.

The rescued migrants are now receiving food, water and medical treatment where required.

Meanwhile, with migrant shelters filling up in Sicily, the Italian navy vessel Vega headed toward Reggio Calabria, a southern Italian mainland port, taking 135 survivors, along with 45 bodies, from a rescue a day earlier. The Vega was due to dock on Sunday.

Under a European Union deal, tens of thousands of those rescued at sea and seeking asylum were supposed to be relocated to other EU nations from Italy and Greece, whose shores have received most of the migrants in recent years.

But with resentment building in some European countries about taking in migrants, the plan never really took off, and only a small percentage have actually been moved.

At the Vatican on Saturday, Pope Francis told several hundred children, among them many migrants, who came from the Italian south to see him, that migrants “aren’t a danger but they are in danger”.

The pontiff held a red life vest, given to him recently by a volunteer, and told the children it was the vest used by a Syrian girl who died while trying to reach the Greek island of Lesbos. “She’s in heaven, she’s watching us,” Francis told his young audience.

Among those in the audience was a Nigerian youth, who lost his parents in 2014 as the family tried to reach Italy by sea.

Francis has repeatedly expressed dismay that some European nations have refused to accept migrants fleeing poverty or war, and have even thrown up fences and other barriers to thwart the arrivals from journeying northward after reaching the continent’s southern shores.