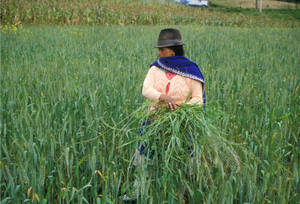 In Ecuador, a female farmer brings in the harvest.

10 December 10 2014, Santiago, Chile – Latin America and the Caribbean have achieved 92 percent progress toward the the World Food Summit goal of halving the total number of people suffering hunger and final push is needed to fully achieve it, according to FAO’s regional flagship report, the Panorama of Food and Nutritional Security 2014, released today.

To achieve this goal, 2.75 million people must overcome hunger in the region during 2015, which requires that governments redouble their efforts, considering that the average reduction over the last twenty years has been 1.4 million people per year.

“Eleven countries in the region have already achieved the World Food Summit goal. Considering the region’s renewed commitment to food security, there is reason to believe that during 2015 Latin America and the Caribbean could make this giant leap towards the eradication of hunger,” said Raul Benitez, FAO’s Regional Representative.

Benitez said that initiatives such as the Plan for Food Security, Nutrition and Hunger Eradication of the Community of Latin American and Caribbean States (CELAC, in Spanish) the region’s main integration body, can provide the necessary  impetus for the region to meet the WFS goal. The plan is expected to be adopted by the upcoming Presidential Summit of CELAC in January 2015.

According to Panorama 2014, in absolute numbers hunger in the region fell from 68.5 million to 37 million people in just over twenty years. The greatest reduction has occurred in Latin America: from 60.3 million in 1990-92 to 29.5 million at present, while in the Caribbean the decrease was lower: from 8.1 million people to 7.5 million.

The region has already met the MDG hunger target

As a region, Latin America and the Caribbean has reduced hunger from 15.3 percent of its total population in 1990-91 to 6.1 percent in 2012-14, having met the hunger target of the Millennium Development Goals (MDGs) before the 2015 deadline. Fourteen countries (Argentina, Barbados, Brazil, Chile, Cuba, Guyana, Mexico, Nicaragua, Panama, Peru, Dominican Republic, Saint Vincent and the Grenadines, Uruguay and Venezuela) have managed to achieve this goal, while four others (Bolivia, Colombia, Honduras and Suriname) show more than 90 percent progress towards it.

Despite the fact that there has been greater hunger reduction in Latin America than in the Caribbean, it is important to note that 80 percent of those who suffer hunger in the entire Latin America and the Caribbean region live in countries of Latin America, and hunger eradication continuous to be a fundamental problem that requires decisive action by all sectors of society.

“Both at regional and at country level the achievements are undeniable. Latin America and the Caribbean has become a true global example in the fight against hunger, and is being closely followed by the international community”, Raul Benitez explained, noting that if the downward trend is maintained, the current generation could become the last to suffer hunger in Latin America and the Caribbean.

Hunger eradication as a political priority

Panorama examines the factors behind the success of the region and its governments in the fight against hunger and points out that, while the role of regional economic growth and political stability is undeniable, the single factor which distinguishes Latin America and the Caribbean is the high level of sustained political commitment with food security, which has been translated into a variety of strategies and public policies focused on the most vulnerable populations.

The region pioneered a proposal to eradicate hunger by the year 2025, creating the Hunger Free Latin America and Caribbean Initiative in 2005, a political pledge made by all countries in the region, which has been replicated in all major regional integration organizations.

CELAC, for example, requested FAO, ECLAC and ALADI to prepare the draft Plan for Food Security, Nutrition and Hunger Eradication, which should be adopted by the Presidents and Heads of State of the region in January 2015 in Costa Rica, during the next CELAC Summit.

The countries of the Bolivarian Alliance for the Peoples of Our America and Petrocaribe are implementing the Hugo Chavez Action Plan to eradicate hunger and poverty, while subregional bodies such as the Union of South American Nations, the Central American Integration System, the Community of Caribbean States, the Community of Andean Nations and the Southern Common Market are also addressing food and nutritional security from supranational perspectives through action plans and strategies specifically tailored to the diverse realities and challenges of each subregion.

A new approach to hunger eradication

According to Panorama, the eradication of hunger in the region has been strengthened by the adoption of a new approach that is characterized by a broader vision of food and nutritional security.

This “twin track” approach can be seen in four key areas that explain the favourable development of the region’s food security indices: the adoption of comprehensive policies and strategies to ensure food and nutritional security; the strengthening of family farming; the fight against poverty, with emphasis on rural areas; and the establishment of better channels of intra-regional and domestic trade.

According to Panorama, to consolidate the advances made in recent years, countries in the region should strengthen regional integration and South-South cooperation, improve systems for monitoring and evaluating public policies and continue the integration of food security and nutrition within their broader development efforts, to provide sustainability to progress already made.