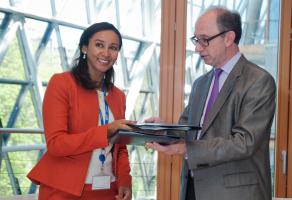 Ms Naiole Santos, President of the Board of Directors of TV Cabo Angola, Board Member of Angola Telecom and Mr Patrick Walsh, Director, Global Partners Department

European Investment Bank support for EUR 20 million of new investment by TV Cabo Angola to provide high-speed internet access for business, private customers and public administration customers in Luanda, Benguela and other cities across Angola was agreed today at the headquarters of Europe’s long-term lending institution in Luxembourg.

“Access to high-speed internet access is essential for economic activity around the world. The European Investment Bank is pleased to continue our engagement to improve communications infrastructure across Africa through this new engagement with TV Cabo Angola.  Once operational, expanded and improved broadband networks in key Angolan cities will enable TV Cabo Angola to provide better services to customers. The new connections will not only enhance links between Angola and the rest of the world, but also provide new opportunities for business and private users as well as improving public sector services.” said Pim van Ballekom, European Investment Bank Vice President.

“This second EIB loan to TV Cabo shows the confidence of the European Investment Bank in TV Cabo Angola Project as well as on its sponsors, Angola Telecom and Visabeira Global. The success of the project in both fostering the information society and creating qualified jobs has allowed TV Cabo to be widely recognised across Angola for supporting local development.” said Mrs. Naiole C. dos Santos Guedes, Chairperson of TV Cabo.

“Internet access and international connectivity is steadily progressing across Africa. The European Investment Bank’s engagement is a welcome step in the right direction and confirms the strong potential and overall importance of improved internet communications in Angola.” said Ambassador Gordon Kricke, Head of the Delegation of the European Union in the Republic of Angola.

The European Investment Bank loan will support expansion of broadband networks in Luanda, Benguela and Lobito, and provision of new optical fibre communication networks in Lubango, Huambo, Cabinda and Soyo. Once fully operational the new customer connections will improve access to advanced telecommunications and internet services and enable improved connections for schools, hospitals, NGO’s, government departments and other users.

In 2006 the European Investment Bank supported the successful implementation of TV Cabo’s first network which was the first large investment project supported by the EIB in the country. The EIB has been engaged in Angola since 1992.

Over the last 5 years the European Investment Bank has provided more than EUR 13.7 billion for investment to improve telecommunications access across Europe and around the world. This has included support for submarine cables connecting Africa to the rest of the world, investment to improve internet access in rural areas and cooperation with leading telecom companies such as Vodaphone, Orange, T-Mobile, TIM, EE, Iliad and Movistar.

Last year the EIB provided more than EUR 2.5 billion for investment in public and private projects across Africa.