You are here: Home / General / International Year of Family Farming closes after giving fresh momentum to this vital sector 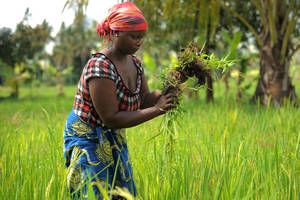 A Tanzanian farmer weeding her paddy

27 November 2014, Rome/Manila – Officials and representatives from family farmers’ international networks, cooperatives, the private sector, academia and UN agencies, today marked the formal closure of the International Year of Family Farming (IYFF) by stressing how the initiative has helped raise awareness of the crucial role played by family farmers in fighting hunger and poverty worldwide. The year was considered a resounding success by all actors involved in the process.

“Above all, strong political commitment in favour of family farming has risen at the highest level across the world, both in countries of the South and the North, throughout the IYFF,” said Marcela Villarreal, Director of FAO’s Office of Partnerships, Advocacy and Capacity Development.

Also in attendance were Special Ambassadors for the International Year of Family Farming: Esther Penunia, and Ibrahim Coulibaly.

Villarreal noted how, thanks to IYFF, many more people around the world are now aware of the importance of the sector – statistics show that family farms produce more than 80 percent of the world’s food in value terms and represent collectively the largest source of employment worldwide.

“We also know that family farming is much more than a mode of food production, it is also a way of life,” she added, noting how this concept formed the basis of a legacy document on IYFF which was drafted by the initiative’s International Steering Committee and presented at today’s closing event.

This year FAO dedicated its annual State of Food and Agriculture report to “Agricultural innovation in family farming” noting how of the more than 570 million farms in the world, more than 500 million are family farms.

In another initiative linked to IYFF, World Food Day 2014 carried the theme “Family Farming: Feeding the World, Caring for the Earth”.

Last month a Global Dialogue on family farming was held at FAO’s Rome headquarters during which governments, farmers’ organizations and private sector representatives explored ways on how to seize the current global momentum and galvanize concrete action in support of family farmers beyond 2014. Participants discussed enabling the policy environment to bolster the capacity of family farmers to supply and access markets, especially at local and domestic levels, including through promoting strong local food systems that link farms to schools and communities, and to generate jobs and incomes.

They agreed that secure access and use of land, water and other natural resources for family farmers is key to meeting these goals.

The Dialogue also endorsed a proposal for the establishment of a web-based tool: the Family Farming Knowledge Platform in early 2015. The platform will be hosted by FAO with the aim of creating the world’s largest high-level collection of national laws, regulations, public policies, relevant data, best practices, compelling research, publications and articles related to family farming.