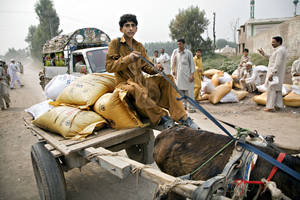 At the same time “the global capacity of fertilizer products, intermediates and raw materials will increase further,” the report said.

As the potential to produce fertilizers will outpace their use, the global potential balance – a technical term measuring the amount available over actual demand – will grow for nitrogen, phosphate and potash, the main three soil fertilizers.

Global use of nitrogen, by far the largest fertilizer base, is projected to rise 1.4 percent each year through 2018, while phosphate use will increase 2.2 percent and potash 2.6 percent. In comparison, the supply of those three critical components is expected to grow by 3.7 percent, 2.7 percent and 4.2 percent per annum, respectively, according to FAO’s outlook report.

The report does not forecast future prices, but notes that fertilizer prices, after a surge in 2011, were broadly lower in mid-2014 than in 2010.

Demand for nitrogen fertilizers is expected to grow fastest in Sub-Saharan Africa, at 4.6 percent a year. However, as current usage there is low, the region will in 2018 use only 340,000 additional tonnes of nitrogen than in 2014, accounting for less than five percent  of the projected global increase.

In East and South Asia, which combined account for 60 percent of all nitrogen fertilizer use, growth over the next four years will be moderate, but account for 3.3 million additional tonnes in volume terms.

North American farmers are expected to use an additional 300,000 tonnes of nitrogen fertilizer in 2018, reflecting an annual growth rate of 0.5 percent, while Western European farmers are set to reduce their use by 50,000 tonnes, according to FAO’s projections.

Applying fertilizer is one way of replacing nitrogen that is removed from soils when crops are harvested. While extensive nitrogen use can entail waste and damage water resources, the huge increase in fertilizer use helped drive a rapid expansion in agricultural productivity in the postwar era.

At one extreme, overuse of fertilizer in some places has led to soils pollution in the form of nitrogen deposition and in some cases damaged water systems. At the other, in most parts of sub-Saharan Africa the under-use of fertilizer means that nutrients taken out of soils by crops are not being replenished, leading to land degradation and declining yields.

FAO’s “Save and Grow” and the first principle of “Building a common vision for sustainable food and agriculture” show ways of maintaining or restoring soil health while relying on fewer inputs to sustainably increase crop productivity, says Clayton Campanhola, Director of FAO’s Plant Production and Protection Division.

The use of locally-tailored crop rotations, mulching and manure can also restore nitrogen to soils. Some plants, notably legumes such as soybeans, have microorganisms in their root systems that take nitrogen from air and make it available to plants.

FAO has also developed methods to monitor crop conditions in real time, allowing for tailored decisions on how much fertilizer is needed. Precision methods of applying fertilizer, as opposed to broadcasting it, also reduce waste and the damage caused by nitrogen runoff.

2015 has been designated as the International Year of Soils, during which FAO is working with its partners to engage the public around the need to sustainably manage this critical resource for food production.

Fertilizer use will vary widely by geography in coming years, with sub-Saharan Africa posting robust demand for nitrogen and potash, albeit from low current usage levels.

Asia as a whole is the largest consumer of fertilizer in the world and relies on imports of all three major nutrients. That’s the case even as West Asia is continues to supply an important surplus of nitrogen, phosphate and potash.

Europe as a whole will also offer a surplus of all three nutrients due to large positive balances in East Europe and Central Asia. Fertilizer use through 2018 is expected to be flat in Western Europe while growing 3.6 percent a year in the easternmost subregion.

Latin America and the Caribbean will depend on imports of all three during the forecast period, during which the region’s use of fertilizers is expected to grow at a robust 3.3 percent annual rate, according to FAO.

Even though overall fertilizer use in sub-Sahara Africa is projected to grow at a 4.7 percent annual pace, the fastest in the world, Africa will remain a major exporter of nitrogen, providing an additional 3.4 million tonnes to the global balance.