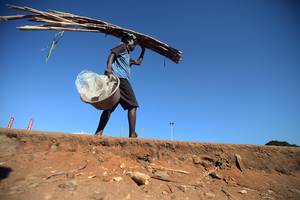 2 April 2015, Rome – The FAO Food Price Index continued to decline in March, dropping 1.5 percent from February and 18.7 percent (40 points) below its level a year earlier.

A sharp fall in the price index for sugar – which reached its lowest level since February 2009 – together with dipping prices for vegetable oils, cereals and meat, more than offset a rise in dairy prices and contributed to the lower index, which in March averaged 173.8 points.

The index has been on a downward path since April 2014.

The FAO Sugar Price Index averaged 187.9 points in March, down a sharp 9.2 percent from February. This was mainly due to improved crop prospects but also the continued weakening of the Brazilian currency against the US dollar, which is supportive to exports.

The FAO Cereal Price Index averaged 169.8 points in March, down 1.1 percent from February and as much as 18.7 percent below its level a year earlier. The downward trend in 2015 has been mainly due to large export supplies and mounting inventories, in particular for wheat and maize.

The FAO Vegetable Oil Price Index averaged 151.7 points in March, nearly 3.1 percent below the February level and reaching its lowest value since September 2009.

The FAO Meat Price Index averaged 177 points in March, down 1 percent from its revised February value, while the FAO Dairy Price Index rose in March for the second consecutive month to average 184.9 points, up 1.7 percent from February.

Meanwhile, the cereal output estimate for 2014 was raised to 2 544 million tonnes mainly due to a larger than anticipated maize harvest in the European Union, according to FAO’s latest Cereal Supply and Demand Brief. If confirmed, global cereal output in 2014 would outstrip the 2013 record by 1 percent.

Looking ahead to the 2015 season, global wheat production is expected to reach 722 million tonnes in 2015, around 1 percent below the current estimate for 2014, mainly due to reduced plantings in the EU. While China, India and Pakistan are all expected to harvest close to 2014’s record levels, production is predicted to decline in the Russian Federation and Ukraine.

As for coarse grains, plantings are only about to start in the northern hemisphere. However, early indications in the southern hemisphere, where crops are more advanced, point to a decline in 2015 production from last year’s high levels. In particular, South Africa’s maize production is expected to decline sharply, by 33 percent, following severe precipitation shortfalls earlier this year.

Rice production prospects for 2015 are generally positive in the southern hemisphere countries, with sizeable increases forecast in Indonesia and Sri Lanka in Asia and Colombia and Paraguay in South America. In Australia, by contrast, output is officially anticipated to fall by 18 percent, reflecting lingering shortages of irrigation water.

FAO’s forecast for world cereal utilization in 2014/15 has been raised by nearly 17 million tonnes since March, to 2 493 million tonnes. The increase largely reflects historical revisions in China and India.

The forecast for world cereal stocks by the close of crop seasons ending in 2015 has also been revised up sharply since last month’s report and now stands at 645 million tonnes. The increase mainly reflects upward revisions to wheat and maize stocks in China.

Based on the current forecasts for cereal stocks and utilization, the cereal stocks-to-use ratio is expected to reach 25.9 percent in 2014/15, its highest value since 2001/02.