You are here: Home / General / FAO and partners call for a global response to deadly banana disease 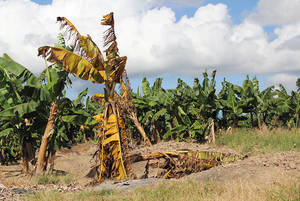 23 December 2014, Rome – FAO and its partners say that a global effort is needed to prevent the rapid spread of the deadly Fusarium wilt disease in bananas, which poses a severe threat to economic welfare and food security in developing countries.

Plant scientists have been warning for several years that the world’s most popular banana variety, the Cavendish, has fallen victim to a new strain of the fungus causing wilting and mass plant die-offs.

Now FAO and a group of international experts have agreed on the framework for a global program on Fusarium wilt that would work on three main fronts of action: preventing future outbreaks, managing existing cases, and strengthening international collaboration and coordination among institutions, researchers, governments and producers.

Supporting ongoing research, educating producers and assisting governments in developing country-specific policies and regulation for prevention of the disease would be key aspects of the program.

Overall funding needs for the work run in the order of $47 million, FAO estimates. Part of that would be used to provide swift on-the-ground assistance to countries facing new outbreaks.

Tropical Race 4 (TR4) of the Fusarium wilt fungus is considered a top threat to global banana production worth $36-billion, which provides a source of income or food to some 400 million people.

“Fusarium wilt disease has been a major challenge in the history of banana production,” said FAO’s head of Plant Protection, Clayton Campanhola, at a meeting of experts at FAO headquarters last week. “After the devastation TR4 recently caused to bananas in parts of Asia, we have to fear its spread in Africa and the Middle East and also to Latin America, and consider it as a threat to production globally.”

“Bananas are the world’s most consumed and exported fruit,” added Fazil Dusunceli, a plant disease expert with FAO’s Plant Protection Division. “With 85 percent of all bananas being produced for domestic consumption, you can imagine the impact of this disease on food security and livelihoods in developing countries.”

FAO’s plan for a new intervention-and-prevention program comes on the coattails of a recent case in Mozambique, prompting an FAO emergency project in December to contain the fungus in the African country.

Earlier outbreaks of the TR4 strain of the Fusarium wilt disease, colloquially known as Panama Disease, brought Indonesia’s banana exports of more than 100,000 tonnes annually to a grinding halt, causing annual losses of some $134 million in revenue in Sumatra alone. Currently the disease is severely affecting more than 6,000 ha in Philippines and 40,000 ha in China.

Once soil is contaminated with the fungus, an affected field becomes unfit for producing bananas susceptible to the disease for up to three decades.

The spreading of the new Fusarium wilt strain T4 has raised fears of a repetition of the disastrous outbreak of the disease in the early 1900’s, when a different strain of the fungus (Race 1) spread like a wildfire across Latin America, causing over $2 billion in losses and nearly decimating the global banana export industry.

The world’s export banana was saved only by switching from the Gros Michel banana – then the industry favourite – to the Cavendish, which is resistant to Race 1.

Cavendish served the global banana supply and export industry well so far. But the TR4 strain of the fungus is forcing the industry, scientific community and governments to once again find alternative banana varieties to replace the Cavendish type.

Developing new banana varieties is not an easy task and takes time due to sterility problems, so scientists have to make extra effort to develop types that are preferable and disease resistant at the same time. One promising banana in this respect, known as GCTCV–219, resembles the Cavendish banana in both taste and shape. It was developed through induced mutations and is now being promoted to be planted in infested fields in Philippines to serve the Japanese market.

The case for genetic diversity

Experts warn that the panacea to Fusarium wilt does not lie only in finding a new immune variety, but to making the banana production systems as a whole more genetically diverse and resilient.

Better use of available local varieties is key to building resilience to disease, preventing food insecurity and major economic losses, according to FAO’s Dusunceli.

“We are seeing that production systems with more diverse varieties and crops are more resilient to the disease,” said Dusunceli.

While many wild varieties of bananas and plantains are not edible, they hold a wealth of untapped genetic material that – with increased investment in research –  could be used to make the banana production and industry more resilient to disease.

But experts also stress that the most effective way of combatting the disease is vigilance to employ preventive measures to stop entrance of the fungus into a country or region, and rapid containment if it does.

Appropriate regulation, along with the guidelines provided by the International Plant Protection Convention (IPPC), are essential to achieving this.