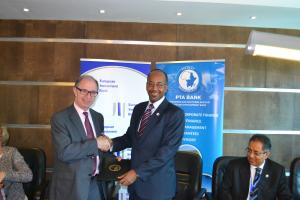 The European Investment Bank, Europe’s long-term lending institution, and East African-based regional development body, PTA Bank, today launched a new EUR 160 million lending initiative to support investment across eastern and southern Africa. The EIB has agreed to provide EUR 80 million for the new initiative that will be matched by PTA Bank and represents the largest single private sector lending scheme ever backed by the EIB in Africa. Under the new initiative agribusiness, energy, manufacturing and service sector companies will be able to access loans in a range of local and foreign currencies.

Under the new programme being managed in the region by PTA Bank companies operating in Kenya, Uganda, Tanzania, Rwanda, Burundi, Ethiopia, Eritrea, Djibouti, Democratic Republic of Congo, Zambia, Seychelles, Malawi, Egypt, Mauritius and Mozambique will be able to access loans up to 15 years in Euro and US dollars or up to 7 years in local currency.

Unlike most recent private sector lending by the European Investment Bank in the region the new programme will not only target small and medium sized enterprises, but also focus on supporting specific investment needs of larger firms.

Commenting on the occasion, Mr Tadesse remarked “We are delighted to join forces with the EIB to give a much needed boost to increased investment in the real economies of eastern and southern Africa which is key to job creation and economic transformation. This programme is a strong addition to other lending programmes we have launched with other funding partners.

The new initiative will be supported by a EUR 2 million technical assistance programme to strengthen environmental, social and money-laundering assessment skills of PTA staff, and to improve assessment of the economic impact of projects financed through the scheme.

The Bank’s assets have been growing at an average of over 30% per annum, with the balance sheet surpassing the USD 3.5 billion mark, and non-performing loans dropping to a historic low of about 3%. It has equity returns of 14% (3 year average) and a cost-to-income ratio of about 20% – among the best in the industry. The Bank maintained its international credit ratings of BB and BB+ given by Fitch and GCR respectively. The Bank’s highest rated shareholders, notably the AfDB, Mauritius, and the Peoples Bank of China (PBoC) have increased their stake in the Bank in the past 12 months.

With growing confidence, the Bank’s capital jumped by over USD 250million in 2013-14, as current and new shareholders injected fresh capital. In 2014, the Bank has attracted eight new institutional investors – 3 pension funds, 3 insurance and re-insurance companies and two other specialized financial institutions. Notably, all of these were African institutional investors, a further reflection of the confidence of African investors in their own financial institutions that show a commitment to strong corporate governance and high performance.

The European Investment Bank is the world’s largest multilateral finance institution and last year provided EUR 1.1 billion for investment in sub-Saharan Africa.  The EIB recognises the essential contribution of local partners to ensuring the most effective focus on lending programmes and over the last 5 years EIB lending for investment by local companies and in smaller projects through local banks in sub-Saharan Africa has EUR 1.4 billion.