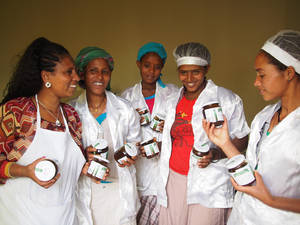 Members of the cooperative whose cactus pear marmalade will soon reach Italian tables.

25 February 2015, Rome – A cooperative of women in Ethiopia is set to reach the international market thanks to a partnership between Italian gourmet food store Eataly and FAO.

The two joined forces in 2013 to support family farmers around the globe in boosting their production and finding ways to reach new overseas customers. The work with the women’s cooperative is one example of this collaboration.

For a few years Tsega Gebrekidan Aregawi ran a small kiosk in the northern Ethiopian town of Mekelle, where local university students would stop by to purchase fresh fruit juice, biscuits and homemade marmalades on their way to and from class.

It was a small operation. At that time Tsega could hardly imagine that some of her own products might someday fly from Africa to reach international markets.

But things changed last year when FAO and the Italian food chain Eataly reached out to her and her five-woman cooperative with a challenging offer.

Founded in northern Italy in 2007, Eataly has grown into a global, high-quality food and beverage chain that combines culinary excellence with tradition — with a special focus on small-scale production, sustainability, and fair trade.

FAO and Eataly offered Tsega and her colleagues support in producing more cactus pear marmalade, which would be then bought and shipped to European tables.

The group rose to the challenge. So far, they’ve produced 4,000 jars of marmalade and are now looking at using the revenues to even expanding their output and the variety of what they produce.

To help them in this effort, trainings were organized to help them improve their performance during harvesting as well as to increase their quality standards. The Ministry of agriculture has been providing technical assistance throughout.

Over the last few months, Tsega and her colleagues have been working hard to produce over 1,500 kg of jam that meet Ethiopian and European food safety standards. The cooperative has also benefited from Eataly’s knowledge sharing on best practices for packaging and marketing and their 4,000 jars of jam are now ready to travel to Rome, where they will soon reach the shelves.

The cooperative’s working space consists of a closed compound with separate spaces for raw fruits, production and the storage of glass jars. The raw fruits, purchased from local growers, are washed and cleaned in an outdoor space.

In this pilot phase, daily production has reached 200 jars. Each of them will be bought at 3.50 EUR, a price considered in line with local market standards and which covers production costs and guarantees significant revenues for its members.

Some of the women in the cooperative are still quite young, but those who are mothers see in this work an opportunity to guarantee an education and a better future for their kids.

On January 31 a delegation from the cooperative travelled to Addis Ababa to meet FAO Director-General José Graziano da Silva, who was in the Ethiopian capital to attend the African Union Summit.

“Our lives have changed since we started in this endeavor,” Tsega told him.

“These are the kind of results we expect from agriculture,” Graziano da Silva said, congratulating them on their success.
“Family farming and small scale producers have a lot to offer — to their local communities, and on international markets. Their potential is large; they just need the right kind of support to unlock it,” he added.

The success story in Ethiopia illustrates what FAO is aiming to do on the ground: empowering women farmers to generate extra income and improve their livelihoods. The result: better food and nutrition, stronger local economies, and small businesses that will be able to thrive on their own once FAO’s intervention ends.

The partnership between FAO and Eataly is also providing support to other small producers in other countries, helping them to find new markets, improve value addition, and get better prices for their goods.

“FAO and Eataly share a common vision regarding sustainable agriculture and the positive impact it can have on local economies,” according to the store’s CEO Nicola Farinetti. “This is an important trial run for cactus pear jam on international markets, and presents an excellent opportunity for the Mekelle cooperative to support itself,” he says.

The teamwork with Eataly is an example of FAO’s focus on partnerships.  Since 2013, the Organization has signed over 60 agreements with a wide range of different stakeholders, including the private sector, civil society, non-governmental
organizations, cooperatives and academia.