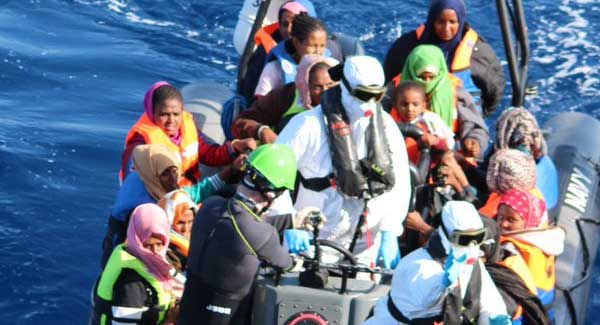 Irish navy vessel the LÉ Róisín has rescued nearly 300 refugees off the coast of Libya.

During a four-hour mission the crew rescued 274 people from an 18 metre long wooden vessel almost 40 nautical miles away from Tripoli.

The LÉ Róisín has now been tasked by Italian authorities to help with the potential rescue of another 125 people.

Once both operations have been completed the rescued people will be transferred to the Italian authorities.

The first rescue operations were carried out by teams from MSF search and rescue vessel the Dignity 1, who took on board 371 people from three unseaworthy boats that were travelling close to each other.

The second set of rescues involved teams from the Bourbon Argos who rescued 417 people from three overcrowded boats.

BREAKING: The Bourbon #Argos has also completed 3 rescues this morning. Around 417 #people are safely on board. pic.twitter.com/6vKn6q7XHl

The 788 people are now safely on board MSF’s rescue boats.