You are here: Home / Press Release / BIGO Discusses Plan with Jordan’s King and Minister to establish first Jordanian office and to Hire 50 AI experts by 2019

SINGAPORE, June 26, 2019 /PRNewswire/ — BIGO hosted an exclusive and intimate session at their Singapore Headquarters with Jordanian Minister for Digital Economy and Entrepreneurship and technology firms, to discuss collaboration and expansion possibilities that would contribute positively to the Middle Eastern Kingdom during the state’s visit to Singapore. 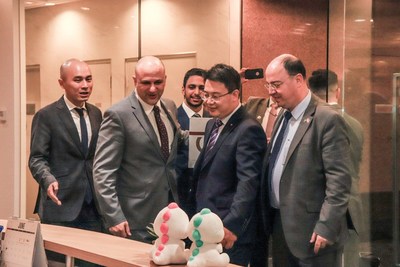 Among the different topics discussed, one of the more impactful topics was focused on the creation of up to 50 hi-tech jobs for the Jordanian AI experts at BIGO by 2019. BIGO Technology already has offices in Middle East, but explained that the Jordan office is strategically critical in being able to tap directly into the existing talent pool. Jordan which has been hailed as the leader in the Middle East within the ICT industry is also making waves as they move into the 4th digital revolution.

BIGO’s President, Jason Hu says, “It is a natural partnership. Jordan has always led the pack during the ICT age and now has naturally progressed into the Internet age ahead of the other nations. Similarly, BIGO is also an emerging leader in the internet industry and it only makes sense to establish a foothold in Jordan for mutual benefits.”

Jordan’s existing infrastructure as well as experience in serving the Arabic community across global markets, deep understanding of Arab consumers preference and established service channels for the global Arabic community makes it the undeniable choice for BIGO’s apps. The Jordan office of 50 people will also serve the Arabic community of BIGO app users; of which 1/3 of the GCC population are daily users.

While at the Singapore headquarters, the discussion touched on the topic of available talent. BIGO offered, among other things to establish a foundation for an Artificial Intelligence (AI) talent pool through collaboration with universities, local technological firms, and industry training programmes.

BIGO’s inclusion of Arab talents into the global pool of in-house AI experts indicates an industry gap to formulate more Arab centric user content, user interface and AI specific algorithms. It is expected that with an established AI pool, Jordan will become a natural and organic ecosystem for more internet companies to follow suit, leading to a more sophisticated and globalised technological industry within the country.

The visit also enabled the esteemed guests to better understand the operational aspect of the business as well as to witness first-hand the team of AI experts working behind the scenes which go to serve the company group with 400 million monthly active users across the globe.

Separate to the visit, BIGO was also invited to participate in a round table, closed door discussion with Singapore’s Minister of Trade and Industry, Minister Chan Chun Sing, His Majesty King Abdullah II of Jordan, Jordanian Minister for Trade Industry and Supply, His Excellency, Dr. Tariq Hammouri and Jordanian Minister for Digital Economy and Entrepreneurship, His Excellency, Mothanna Gharaibeh. BIGO was acknowledged several times for their cutting-edge AI technology and intensive “Global but Local” Strategy that was instrumental in their expansion plans.

His Majesty King Abdullah II’s third visit to the island state was centred around the theme of interfaith understanding and dialogue, international business opportunities and water resources management.

BIGO Technology is a fast-growing Singapore technology company established in 2014.

Dedicated to creating a better-connected world for everyone, BIGO provides a portfolio of video broadcast and VoIP related products and services powered by advanced Artificial Intelligence (AI) technology. The major products include BIGO LIVE, Likee (Formerly LIKE video), and imo. The company group now has over 400 million monthly active users in over 150 countries worldwide.

To enable people to showcase, discover, and stay connected, BIGO is devoted to continuously innovating its AI capabilities, allowing our users to enjoy a positive, healthy, and creative online environment.

At present, BIGO has 5 R&D centres, and over 20 offices around the globe.