Algerian President: We Are Ready To Help Restore Peace To Libya 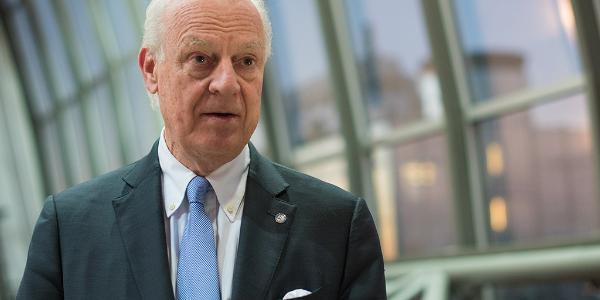 UN Special Envoy for Syria Staffan de Mistura has warned MEPs that Aleppo’s besieged eastern part could be obliterated by Christmas. After six years of war, the suffering of civilians in Syria continues unabated and in recent days more than 50,000 people have fled eastern areas of Syria’s second city as government forces advance. In an interview following his meeting yesterday with Parliament’s foreign affairs and development committees, the UN envoy spoke of the need for a political solution.

Can you give us an overview of the current situation in Syria?

With sadness and horror, we are watching an acceleration of military efforts to close the conflict. People have been suffering for six years and just today around 16,000 people are moving in eastern Aleppo. It is a very grim picture from a humanitarian point of view.

We need international pressure to ensure that there is no continuation of the heavy bombing. In all fairness, there is no evidence that Russia is bombing eastern Aleppo right now; the Syrian air force is. I cannot say how long eastern Aleppo will last. By Christmas time, once it has perhaps been taken into government control, there will have been a lot of damage. Humanitarian aid needs to get in before that happens.

With so many parties involved, what hope is there for a credible political solution?

You could probably consider this mission near- impossible. Given the geopolitical environment, there has scarcely ever been a conflict with so many players, both regionally and internationally, as well as so many fighting groups and Daesh. This does not mean however that there is no solution. We have a roadmap: resolution 2254. We should be applying it, and it is never too late. In any case, there is not going to be any stable military outcome without a political solution.

Regarding talks, there is not only hope but also need. We cannot be hostages of military events all the time. The secret is to have all interlocutors seriously ready to negotiate, including the government.

What role is Russia playing right now? President-elect Trump has expressed an interest in collaborating with Russia on Syria; what impact could this have?

There is no doubt that Russia’s involvement has been a game changer. Their official priority is that there be no new Libya, so a gradual transition instead of a coup. Russia’s second aim is to fight Daesh. If President-elect Trump follows up with what he said and makes fighting Daesh a priority, I am convinced that his interest in a deal with President Putin is a good idea. We all want to fight Daesh but defeating Daesh needs a politically inclusive solution.

The EU and its member states are the leading donor to the international response to the crisis. What role could the Union play in post-conflict reconstruction and reconciliation in Syria?

Europe is the first place affected by the Syria crisis; the refugee crisis has become a major issue for political stability. Europe must be at the frontline and support the UN as Federica Mogherini is doing. The EU can also do a lot in terms of mediation, with Iran, Saudi Arabia and other regional players. The most important aspect though is reconstruction. No other institution is more ready to contribute towards the reconstruction of Syria. Again, this relies on a credible political, inclusive solution. Not merely a defeat or a victory.