UN concerned by US claims Russia sent jets to Libya

Joint Statement Condemning the Use of Improvised Explosive Devices against Civilians, May 28, 2020

You are here: Home / General / Article – António Guterres: “A strong and united EU is fundamental to a strong UN” 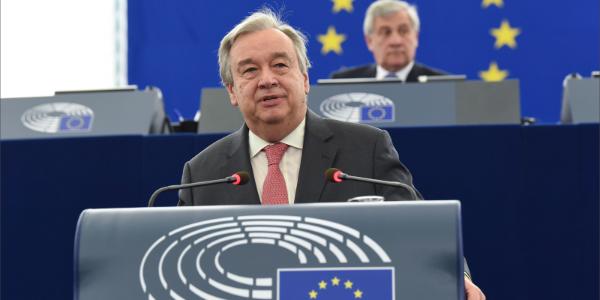 “A strong and united Europe is an absolutely fundamental pillar of a strong and effective United Nations,” said António Guterres, addressing MEPs in Strasbourg on 17 May. The Portueguese UN Secretary-General, the first European one since Austria’s Kurt Waldheim in the early 1980s, said global challenges such as the multiplication of conflicts, a human rights violations, climate change and globalisation required the EU and the UN to work together.

Welcoming Guterres, Parliament President Antonio Tajani pointed out that both the UN and the EU were created after the Second World War “to ensure peace and prosperity through a multilateral cooperation”. “Together, we have to find political solutions to the conflicts in Syria, Libya, and Yemen and to address Isis,” he said. “Together, we need to have to defend the dignity and freedom of people, give perspectives to the new generation and put into practice the agenda 2030.”

In his speech Guterres expressed his gratitude and appreciation for the EU’s commitment to multilateralism and its contributions to development cooperation and humanitarian aid: “The European Union is clearly the most successful project of peace sustainability in the world since the beginning of history.”

The UN Secretary-General addressed a number of issues, notably Syria, migration, globalisation and the need to preserve cultural diversity.

This is the first time Guterres has addressed the European Parliament as UN Secretary-General since succeeding Ban Ki-moon on 1 January 2017. Guterres was UN High Commissioner for Refugees from June 2005 to December 2015 and Prime Minister of Portugal from 1995 to 2002.