The United States Sanctions Network Threatening the Security of Libya 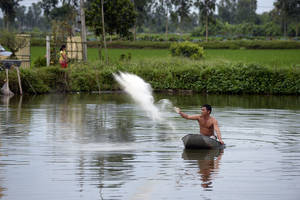 Aquaculture has more potential, especially in Asia and Africa. A man feeds his pond fish in Nhan My, Vietnam.

14 November, 2014, Rome – Fish farming will likely grow more than expected in the coming decade, offering a chance for improved nutrition for millions of people, especially in Asia and Africa, according to a new report.

Increased investment in the aquaculture sector – particularly in productivity-enhancing technologies including in the areas of water use, breeding, hatchery practices and feedstuff innovation – should boost farmed-fish production by as much as 4.14 percent per year through 2022, notably faster than the 2.54 percent growth forecast made earlier this year in a joint report by FAO and the Organization for Economic Cooperation and Development.

“The primary reason for increased optimism is that there is ample room for catching up with more productive technologies, especially in Asia, where many fish farmers are small and unable to foot the hefty capital outlays the industry requires to expand output without running into resource constraints,” said Audun Lem, a senior official at FAO’s Fisheries and Aquaculture Policy and Economics Division and one of the lead authors of the 120-page report.

Africa, with formidable water resources, should also host ongoing rapid growth of more than 5 percent a year, the fastest in the world but building on a very low current base level, according to the report.

Aquaculture is a young industry compared to livestock farming and has grown from virtually nothing in 1950 and to a record production of 66.5 million tonnes in 2012, up almost thirty-fold since 1970. About 50 percent of the $127 billion in global fish exports in 2011 came from developing countries, which receive more net revenue from the fish trade than from their exports of tea, rice, cocoa and coffee combined, Lem said.

In terms of direct human consumption, farmed fish in 2014 surpassed captured fish, which reached a plateau in the mid-1980s and is expected to grow only 5 percent over the next decade, thanks largely to reduced waste as well as better gear reducing unwanted bycatch and improved fisheries management.

Global per capita fish consumption increased from 9.9 kilograms in 1970 to 19.1 kilograms in 2012, although rates vary substantially by and within regions. Africa, Latin America and the Near East have consumption levels of around half the global rate, while Asia, Europe and North America all have rates of about 21 kilograms per capita.

Fish prices in 2022 will be 27 percent higher than today in FAO’s baseline scenario, but up to 20 percent lower if acquaculture expands more quickly.

Fish has a special nutritional role

Fish are the healthiest of meats, their farmed production has a far smaller carbon footprint than livestock, and they are also huge providers of the micronutrients people need. Beyond the energy and protein they supply, they lower the risk of coronary heart disease and improve cardio-vascular health. Fish are also supreme suppliers of long-chain n-3 poly unsaturated fatty acids (LC n-3 PUFA), which are demonstrably linked to better cognitive development as measured by reading skills up to the age of 12.

“Fish is not just food,” says Jogeir Toppe, a FAO officer and expert on fish and nutrition. He cited the case of the mola, a pond fish in Bangladesh that has exceptionally high levels of zinc and iron and Vitamin A as well as 80 times the calcium content as tilapia. Similar pelagic species elsewhere, such as African lake sardines, have similar micronutrient profiles, but many indigenous fish have yet to be studied.

Those attributes are invaluable as 800,000 child deaths each year are attributable to zinc deficiency, 250 million children worldwide are at risk of vitamin A deficiency, and almost a third of the world’s population is iron deficient. Seafood is also practically the only natural source of iodine.

However, the new study noted that households with rising incomes often shift away from such humble types – what the industry calls “trash fish” – towards fattier and filet-friendly species such as carp which are less efficient providers of micronutrients. One reason is that the higher-status fish are often eaten as filets while the mola and its kin are typically eaten whole.

“The highest iron, zinc and calcium content of fish lies in their heads, bones and guts, which is often the part that gets thrown away, as with tuna,” said Toppe. Somewhat ironically, byproducts such as fish heads or the back-bones of Nile perch whose fresh fillets are exported, may often be of higher nutritional value than the main product, he added.

FAO called upon policy makers to take such nutritional considerations aboard, especially in a phase of growing aquaculture operations.

Fish farming ought also to be analysed through a broad food system lens, as it impacts a host of factors, ranging from environmental impacts and hydropower projects through tenure rights for smallholders, sharing systems for common-pool water resources, to the employment of women in local retail networks, all of which involve complex social institutions and customs.

FAO’s report suggests that increased demand on fishmeal prices due to aquaculture’s needs is unlikely to impact prices as alternatives, such as feed based on vegetable proteins, will be developed to meet needs and respond to price pressures.
Such innovation is particularly important for Africa, where fish farmers rely heavily on imported feedstuff from European countries.

A notable shift is already underway as Peruvian anchovy, Chilean mackerel and Scandinavian herring are increasingly being used for direct human consumption while more efficient use of other fish byproducts are being used for fish oil production.