SRSG Ghassan Salame remarks to the press at the International Conference on Libya – Berlin, 19 January 2020

U.S. calls for immediate resumption of operations by Libya’s NOC

You are here: Home / General / Agriculture key to Caribbean food security and coping with climate change 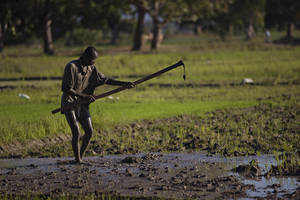 A farmer hoeing a rice paddy in Haiti.

27 February 2015, Nassau – Agriculture, particularly family farming, is crucial for Caribbean countries to achieve food security as they face climate change and other challenges, and can also spur their economic development by creating jobs, especially for youth, according to FAO Director-General José Graziano da Silva.

In a statement to a Caribbean Community (CARICOM) heads of government summit in the Bahamas on Thursday, he stressed how over the last two decades efforts to combat hunger and malnutrition in the Caribbean have made substantial progress.

The FAO Director-General noted that more than 70 developing countries have already met the Millennium Development Goal hunger target of halving the proportion of hungry people by 2015.

This includes four CARICOM countries out of the 130 nations for which FAO regularly monitors hunger figures: Barbados, Guyana, Saint Vincent and the Grenadines, and now Suriname as well, which has just achieved the goal this year.

“Let´s be inspired by these success stories, because a lot remains to be done,” Graziano da Silva told the assembled leaders.

He noted that hunger is only one of the faces of malnutrition. Obesity is the other extreme affecting over 500 million adults. “This is an issue of concern in the Caribbean and FAO is assisting CARICOM countries design and implement strategies, policies and plans of action that tackle the multiple dimensions of malnutrition,” the FAO Director-General said. Action plans are already approved in Belize, Jamaica, St Kitts and Nevis, and St Lucia and are ready for approval in most of the remaining countries.

Graziano da Silva stressed how the island nations of the Caribbean are particularly vulnerable to extreme natural events such as hurricanes — being made more frequent, violent and unpredictable by climate change — which threaten agriculture, food security and sustainable development.

“In few places is the impact of climate change so evident as in Small Island Developing States. For SIDS, climate change is not just an urgent issue. It is a question of survival,” the FAO Director-General said.

FAO is working with governments and the Caribbean Disaster Emergency Management Agency (CDEMA) to build resilience, strengthen capacities and mobilize resources to deal with the impact of natural disasters.

The FAO Director-General also referred to the fact that the food prices increase that began in 2008 has had a major impact in the food import bills of most CARICOM countries. “Despite recent falls, international food prices still remain higher than pre-2008 levels and they will remain high as long as we can predict,”  Graziano da Silva said.

He described agriculture and family farming as “drivers of inclusive economic growth and sustainable development,” and noted how they can create new employment opportunities, especially important for youth, and be linked to the tourism industry, an important source of revenue for many Caribbean countries.

The FAO Director-General also mentioned several initiatives involving CARICOM countries taking place in the context of South-South Cooperation – the mutual sharing and exchange of development solutions, including knowledge, good practices, policies, technology and resources between countries in the global South.

Cuba, for example, is assisting Caribbean countries fight the Black Sigatoka plague that affects banana production, while Brazil has developed a strong cooperation programme focusing on food security and nutrition, supporting and linking family farming to the provision of school meals.

“FAO is here to work with you to be a partner in the road to achieving sustainable development” the FAO Director-General concluded.