You are here: Home / General / 2014 seen as record year for world cereal production 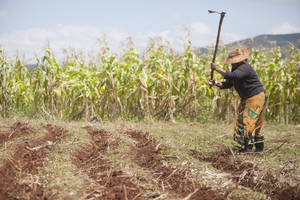 Simisu Sakola works in her cornfield in Swaziland. Southern Africa has had a strong maize harvest in 2014.

11 December 2014, Rome - Latest indications confirm that world cereal production will reach an all-time record of more than 2.5 billion tonnes in 2014.

Buoyed by bumper crops in Europe and a record maize output in the United States of America, this year’s cereal output should reach 2.532 billion tonnes, including rice in milled terms, or 0.3% higher than 2013, according to FAO’s latest Crop Prospects and Food Situation Report.

The record global cereal harvest in 2014 will outpace projected world cereal utilization in 2014/15, allowing stocks to rise to their highest level since 2000 and pushing the worldwide stock-to-use ratio, a proxy measure for supply conditions, to rise to 25.2 percent, its highest level in 13 years, according to FAO.

However, the report also warns that food insecurity is worsening in a number of countries due to civil conflicts, adverse weather and the Ebola virus disease (EVD) outbreak. Some 38 countries are at risk of food insecurity, including 29 in Africa, 3 more countries than reported in October.

EVD triggered one of the biggest shocks to West Africa’s agriculture and food sectors, as it started to spread when crops were being planted and expanded throughout the farming cycle, especially in Guinea, Liberia and Sierra Leone. FAO warned that local rice prices and those for cassava, the region’s second staple food, showed notable increases in Freetown and other cities in September.

Adverse weather in the Sahel region is also expected to result in a sharply reduced harvest – by as much as 38 percent below average in Senegal.

The situation in Syria is particularly urgent, as a weak harvest is exacerbating strains due to worsening civil conflict. An estimated 6.8 million people – some refugees in neighboring countries – are facing severe food insecurity. FAO reports a notable production decline for the 2014 crop, due to abandoned land, scarce labor, damaged power stations and canals as well as drought conditions.

The situation in Iraq is also acutely serious, where the number of people displaced due to civil conflict has tripled since last year to 2.8 million.

One third of the population is in need of urgent food assistance in the Central African Republic (CAR), where this year’s food crop production is estimated to be 58 percent below average despite improving on 2013, FAO said. It noted an increase in violence since early October in a country where one in four households has resorted to negative coping strategies, including selling productive assets and slaughtering livestock.

Prices of agricultural commodities shot up as much as 70 percent this year in the CAR. According to FAO, the decline in cereal output was partially mitigated by a large 45 percent jump in the production of cassava, which though less nutritious is less reliant on labor and other inputs.

Refugee movements – especially from Sudan’s Darfur region, northern Nigeria, the CAR and Mali – have put pressure on local food supplies, notably in Chad, where more than 550,000 people need food and livelihood assistance, according to the report.

While the recent harvest and delivery of humanitarian aid has offered relief, more than 6 million people in South Sudan, Sudan and Somalia are deemed to be in need of food and livelihood assistance. Prices in those countries remain at high levels, with sorghum prices running as much as four times higher in some of the most conflict-affected areas, further deteriorating vulnerable people’s access to food.

Elsewhere in Africa conditions were better, especially in Southern Africa, where stable maize prices declined due to ample supplies from this year’s bumper output boosted food security. More stable maize supplies also led to a 78 percent drop in the number of food-insecure persons in Zimbabwe.

Recent harvests and favourable prospects for the second season crops helped push maize prices down in some countries of East Africa.

Meanwhile, 2014 cereal crop production was slightly below average in North Africa, where Morocco suffered sharp reductions due to erratic rains while the output in Tunisia recovered after a poor 2013 harvest.

Mexico is enjoying a bumper maize crop and its cereal output is expected to increase by 7 percent above last year’s record harvest, FAO said.

That may ease the production short-fall expected in Central America, where a drought earlier in the year pushed the maize output down by around 9 percent, resulting in 400,000 families in Honduras, El Salvador and Guatemala needing food assistance.

Aggregate cereal output from Europe this year is estimated to be 5.6 percent higher than 2013, while the U.S.’s record maize output comes despite less acreage being sowed